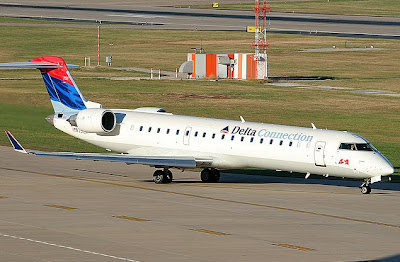 The whirlwind of adjusting to a new job, in a new city, working with new people at not one but TWO trade shows had taken its toll on me out in Florida. When I woke up for the first day of NBAA (when the picture in the following entry was taken) I couldn't remember ever having been so tired, or ever dreading what was to come so much. THIS wasn't why I wanted to write about aviation... God, what had I done?

Much like getting my wisdom teeth pulled -- and without benefit of the truly, truly wonderful drugs -- I suffered through it because it had to be done. Truth be known, a lot of it was pretty interesting; more important than personal enjoyment, I learned a lot... so let's call it 1/2 oral surgery, 1/2 lesson grudgingly learned. And yes, I'd do it all again.

Now, though, begins the real fun: the daily routine of being Associate Editor for ANN. I even have business cards (below) so it's official, I'm really working for them. 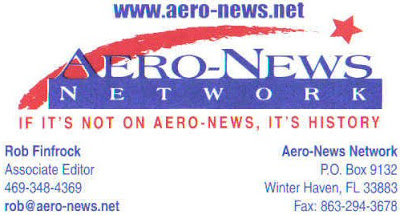 The rough schedule goes something like this: wake up early, and while Senior Editor Pete Combs is playing big-shot radio personality in NC, I'll grab any headlines from overnight and post them on the site in "real-time" for the morning. Depending on the workload, I then take a break until Pete is back in pocket at around noon, and then we'll coordinate what to post for the next day and what should go on that evening's Aero-Cast. Time will tell how much time that will take, although I've been assured I'll still be able to have a life, such as it is.

There will be moments of fun, too -- I'm supposed to check out IndUS Aviation sometime this week down at RDB (I refuse to call it Dallas Executive -- "Redbird" is such a great name for an airport, even better than Albuquerque's Sunport) and fly the company's Thorpedo T-211 light-sport aircraft. It's not the Avanti II (below) but it'll do... 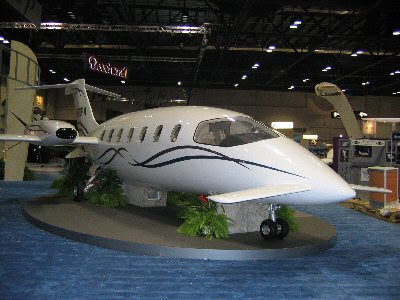 And there will be more travel. I'll also be able to start flying again shortly, working towards the private license -- and I'll be able to write about it.

Sometimes, life doesn't suck. I've been thinking about that a lot lately, as well as the circumstances that brought me to this point. I'd never thought I'd be at this point in my life, back in 1998 when I was licking my wounds from Fresno. Nor would I have believed I'd be here now had you asked me in the summer of 2001, when I was unemployed, lovesick over a truly worthless woman, and completely unwilling to intermingle with the outside world. Back then, I chose instead to lock myself in my little house off El Pueblo, generally feeling sorry for myself. After three months like that, my friends and family finally forced me to leave the house, and get a job -- any job would do.

That led me to a little courier outfit called DMC -- which, one year later, led me to the world of small airplanes. Almost a year to-the-day after that, I left DMC for American Gypsum (yeah, yeah, thanks Tony) which, in a roundabout way, led me to Aero-News -- and Dallas, a city that has agreed with me more so than not.

Life is often more interesting than we give it credit for.
Posted by flightwriter at 1:41 PM No comments: 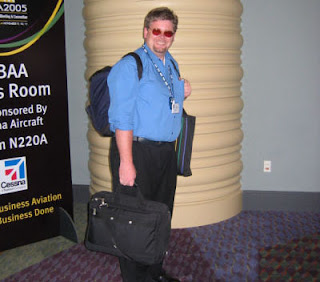 Quick head count: there was Kevin, Dave (Higdon, a freelance av writer working for ANN for NBAA) and me... and that was all. Jim had already stated he would be out most of the day, and Pete's already back in North Carolina... and that's the entire staff.

What followed could best be described as farce, but at least it was high farce. With four conferences scheduled per hour, that meant one would get shafted right off the bat. We often picked the wrong one to blow off. Case in point:

TAG Aviation announced a new Part 135 operation flying the Eclipse 500, at the same time a French avionics firm was announcing its new in-cabin wifi/broadband entertainment system. Guess which one matters to the av-community more. Guess which one I was at. (Hint: they served champagne and chocolate-dipped strawberries afterward. I passed.)

Dave -- who has done this many times before, so he knows where to be -- heard about the first Adam 500 centerline twin to be delivered to an actual customer. I was covering... another wifi provider, this time from Switzerland. Cessna announced certification for the Encore.

Dave was covering an FBO presser while I was hearing about an aviation weather provider's new online dispatching and flight planning program (actually pretty interesting -- any AG'ers reading this, it is EXACTLY like CarrierPoint for airplanes) while Kevin was covering... yep, another wifi (there were seven in all, Kevin got all but two of them.) All three of us missed the announcement of Raytheon's new Hawker 850XP bizjet.

There were some victories: I got to listen to Vern Raburn describe flying the Eclipse 500 into Peter O. Knight in Tampa last week (a similar talk he had with Jim is today's Featured Aero-Cast) and I also learned a little about the Piaggio Avanti II, the upgraded version of N130EM, Eagle Materials' plane. Kevin got to schmooze with some fellow aero-heads, and Dave got a scoop on a Bombardier announcement.

And then there was my last conference of the day, with Brazilian regional-jet manufacturer Embraer.

The company announced some more details on its upcoming very-light jet (VLJ, the market Eclipse arguably pioneered) and light jet (LJ) aircraft. Embraer announced both would feature a Garmin G1000 avionics suite, which was kind of surprising as both Avidyne and L-3 had been courting Embraer pretty hard. But that wasn't the big news...

The company also announced the unveiling of the cabin mockups for both aircraft, scheduled for Wednesday morning. The official names of both airplanes would also be revealed at that time -- "not a moment before."

All was well with their plans until the Q&A session, when right off the bat an unidentified reporter (not me, I swear) asked "what can you tell me about the Legacy 600?"

Heads turned. There is no Legacy 600 in Embraer's line...

"Um... nothing, until tomorrow morning," the Senior VP handling the conference stammered, in thickly accented English.

Read how Aero-News handled the story here. Guess who wrote it!

P.S. I offer the above picture as an example of karma -- because we haven't had any of those lately. For anyone who ever said I failed to hold my weight in my past jobs, rest assured this one is making up for it...
Posted by flightwriter at 1:40 PM No comments: 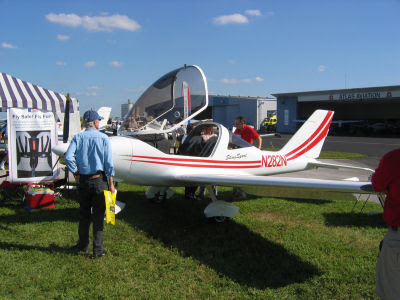 The 2005 AOPA (pronounced in the industry as "Ay-Oh-Pah," although each letter should be said as it's the abbreviation for Aircraft Owners and Pilot's Association) Expo is on the books, and we at ANN managed to put out some damn fine coverage, if I do say so myself. Those three days in Tampa also served as a great -- and educational -- introduction to the life of an aviation journalist, which is something I'll admit I'm still struggling to come to terms with. I'm not used to days of varying hours, intermittent sleep, and being in the company of people who know far, far more about aviation than I do. And it's all very intimidating... very cool, too, but very humbling.

Fortunately, I'm learning a lot too, which is what it's all about. The perpetual grin that was on my face all last week has now faded somewhat, but it's been replaced by a more thoughtful, curious smile that hopefully says "bring it on, I want to know it all, no matter how much it knocks me on my ass." 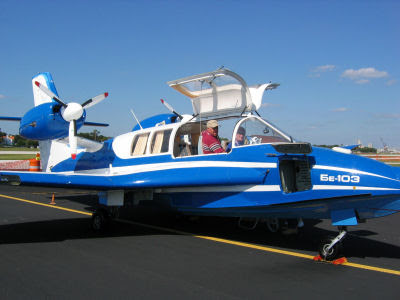 Which it has, as by the end of yesterday my editor and coworkers were all speaking of how I was showing signs of strain. Maybe it was when I offered to pay sticker price on a Beriev 103 (below), a six-passenger, 4000 lb. Russian twin-engined amphibian that, while very cool, also has a payload capacity of one SMALL person (ideally, the pilot) when loaded with full fuel. Or when I hugged the StingSport, a LSA I really, really want to own (top). 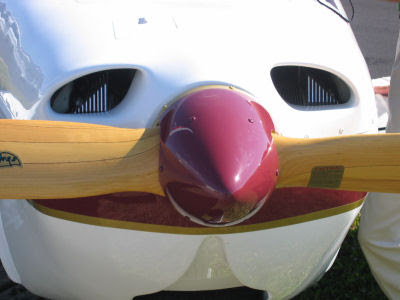 Either way, it was decided by unanimous vote that a dead newbie was of no use to ANN, so I was given today off. I spent some of it back at Peter O. Knight airport, the location of the static display for AOPA and where the photos above were taken. The airport, quite possibly the most scenic venue in all of Tampa (not saying much, alas... how can a city surrounded by the ocean be so damn dull?) is very close to The Perfect Airport. I intend to write about it in an upcoming ANN feature, so be on the lookout... 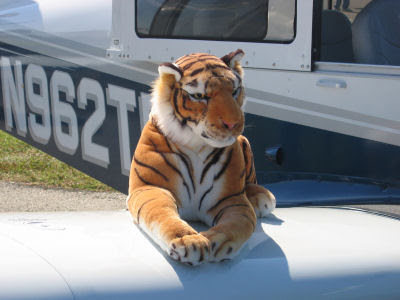 Now, onto Week Two, and the National Business Aviation Association (NBAA -- clever acronym at your own risk) show in Orlando now looms. Lessons learned at AOPA will be now be practiced, before I return "home" to Dallas. (Home, in this context, is where my stuff is, but not my heart anymore.)

Stay tuned!
Posted by flightwriter at 1:39 PM No comments: