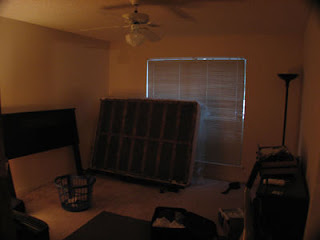 It is my solemn prayer that at this time, 24 hours from now, all my belongings will be safely onboard Lee's truck... preferably without getting soaked by the ever present rains that have drenched North Texas since -- well, January, or so it seems.

Since I'm already praying, let me add I also hope that, 48 hours from now, the aforesaid truck and belongings are in Albuquerque, waiting to be unloaded Sunday morning. And yeah, I'll also throw in a quick "Hail Mary" for all the crap to be off the truck by this time Sunday, in my new apartment, awaiting unpacking and sorting.

The next 72 hours are gonna be a lotta fun.

With all that's been going on this week, I've had little time to pause, and lament the fact my time as a Dallas resident is about to come to an end. There have been brief respites -- last weekend's trip to Austin comes to mind -- but I've honestly been too busy with work and packing to think about anything other than logistics of the impending uprooting. I haven't even taken one last drive through Addison Airport... and I'm not sure I'll have the chance to, at this rate.

The Dallas I moved to three years ago, isn't the same Dallas it is today. I'm no longer at AG, and Chickie's no longer at the Crow. No one hacks at the old job, anyway.

I miss that somewhat wide-eyed optimism and uncertainty that lurked over my first few months out here. I don't think I settled into life as a Dallasite until three or four months after I got here.
I love this city. Warts and all -- and Dallas as many -- the metroplex moves at a perfect pace for me. Everything happens at 1.5 times the speed it does in Albuquerque; even traffic jams seem to go quicker here, at least to me. 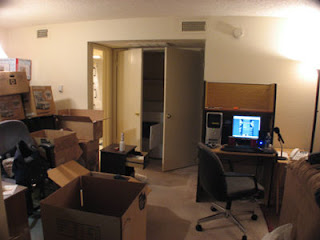 I'll miss the feeling I got driving home from the inevitably late flights into DFW, returning from AOPA, Sun 'N Fun, or Oshkosh... moving at a quick clip down the GBT (George Bush Turnpike) at around 12:30 am, looking at the sleeping city and feeling like I was... home. Which is odd, because most wouldn't think of Dallas as the kind of place that instills that sense of familiarity.

I'll miss my Krogers down the road, and my dry cleaners right next door.

I'll miss my own private sanctuary, down the road just a bit further, called Addison Airport.

I'll miss the museums I didn't have a chance to visit, or visit enough. Ditto the Nasher Sculpture Garden, and the aquarium.

I'll miss the nighttime view of the downtown skyline, illuminated in all its glory.

I'll miss Dallas.
Posted by flightwriter at 5:21 PM No comments:

Rooms With A View 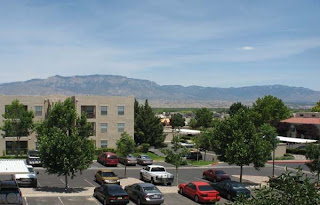 Sitting here at the viewing area of the Sunport, waiting to catch my flight back to Dallas... the last time I'll fly in that direction to go "home," at least for the foreseeable future. Sigh...

It's been a good trip, albeit a very quick one. I signed the lease on my apartment Sunday, and I was happy to see that it has a pretty decent view of the mountains over the building across from it. Definitely good enough to see the Sandias turn into watermelons for a few fleeting moments each evening.

With less than two weeks now to go before I head back for good, I have to admit I'm getting excited. It's a nervous energy -- equal parts "God, I want to get that over with" and "I know I'm gonna have fun unpacking and getting stuff set up."

This weekend comes a trip with Shoe, Lee and Dustin down to Austin (yep, returning there just over a month since I visited with Monk) to celebrate something of a "Rob's Last Stand in Texas." I'm not going to say there's gonna be a lot of drinking, but the hotel is within stumbling distance of Sixth Street, so that tells you something. I just can't wait to visit The Elephant Room again... looking forward to some smooth jazz.

Oh, and no flying this week... I'm going to be busy covering all the news from the 2007 Paris Air Show, and the weather looks iffy tomorrow anyway. I have one last chance next week to fit the cc's in... it may happen, it may not. Kinda leaning towards wrapping up everything in New Mexico at this point.

Well, gotta go stand in line for an hour to get a good seat when the cattle call is released... that is, after I watch a C-17 take off. And I've seen two Eclipse 500s do touch-and-goes in the past 45 minutes, too.

Signs...
Posted by flightwriter at 5:20 PM No comments:

If Wishes Were Horses Eep... the move is becoming increasingly real. I leave tomorrow for a quick trip back to New Mexico, the last one before I become an official resident of the state. That will happen Sunday -- Happy Father's Day, Dad! -- when I sign the leasing agreement on my new apartment. I'm debating whether to go ahead and buy a few needed things after that... a couple new bookcases, a futon, and possibly a new TV... or wait until I move in for real.

On that front, I continue to (increasingly half-heartedly) pack away my life's possessions away, in anticipation of the actual move. I've enlisted the help of my friends Shoe and Monk to assist in packing the truck; both very graciously agreed to help, though under some protest -- as both don't want to see me leave.

God, I'm going to miss them... as I'll miss Lee, who has offered to drive me and my possessions back to New Mexico ("take it all to Laredo instead," Shoe quipped during a final get-together at the Crow on Friday). And his wife Diana, who cooked a final "Italian-style" meal Sunday in celebration of the last episode of "The Sopranos" (the spaghetti was excellent; the episode blew.)

I've taken to calling the move back to New Mexico a "pragmatic" move. It's a conscious decision I made, after a stark examination of the situation at hand. That's not to say I don't want to move back to New Mexico, per se; as the time grows nearer, I'm looking forward to the change of scenery (including the fact that, unlike this part of Texas, New Mexico HAS scenery) and the fact I'll be closer to my folks. There's also the flying thing, of course.

I'm not sure whether I would say I'd rather stay in Dallas; there's as much point to that as saying "I'd rather have never gotten TC." No use wishing; you play the cards you're dealt, and take it from there. The cards are telling me to return home, at least for a little while, and plot my next move.

Thankfully, I'm in a position to be able to do that.

I'm buoyed by the fact that in the past three years, friendships that started in Albuquerque continued to grow and develop. I've especially grown closer to Monk and his wife, Quinn. It's funny to think how much our friendship has evolved and grown from the time we celebrated New Year's Eve 2004 with a fondue dinner, followed by a disjointed trip to the seediest bar in Albuquerque's Northeast Heights; to the time I piggybacked my meager possessions on the back of their moving van for the trip out to Dallas; and today. That journey has seen several jovial dinners, innumerable skating missions and awesome conversation always... and I don't plan for that to change. I'm already planning my trip back to Dallas for New Year's 2008.

I'll have more ruminations later, I'm sure. For now, back to work, and back to packing.
Posted by flightwriter at 5:19 PM No comments:

Furthermore, Dr. B also gave me some much-needed reassurance on the lymph nodes that popped up on the last CT scans. First of all, both of those scans were done by a new radiologist -- "who I don't like," the good doctor has told me before -- and who seems to be firmly in the "cover my ass" category: he or she notes EVERYTHING. Including "non-pathological" lymph nodes, that do not appear to be cancer-related, and that haven't grown at all in four months.

"Everyone has lymph nodes. See this?" Dr. B asked me, pointing to his neck. "This a node I've had for years. It's no big deal."

After a handshake from Dr. B, and hugs from the nurses, they sent me on my way. My next checkup will be in Albuquerque, in August. The two-month clock has been reset. I can now officially start to look forward to getting the move out of the way, and Arlington and Oshkosh, too.
Posted by flightwriter at 5:18 PM No comments: