Are you afraid, too?

When these weigh heavily on my psyche--- as they have been, these past few months--- I know that it's probably time to go flying.  Fortunately, the weather around Dallas as been spectacular lately, and mostly cooperative.  I've been able to fly pretty often, really. 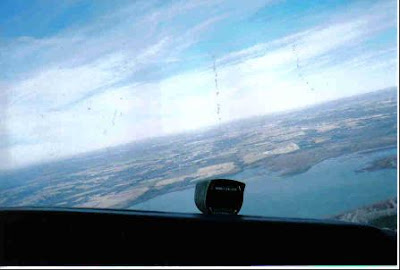 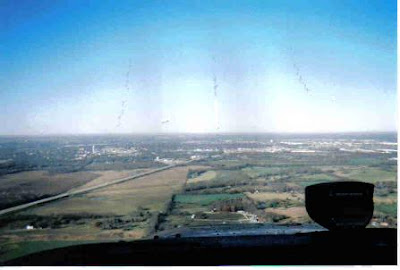 Preflighting an aircraft, for me, is a ritual.  It's kneeling before the altar of flight, asking for acceptance into the skies.  There are many things that need to be checked, that need to be within tolerances in order for the plane to fly.  It's not difficult, but it does demand a keen eye.


Fortunately, all systems are go.  Today's agenda calls for some touch-and-goes in the pattern, but first I want to check out the northeast practice area--- directly over Lake Lavon. 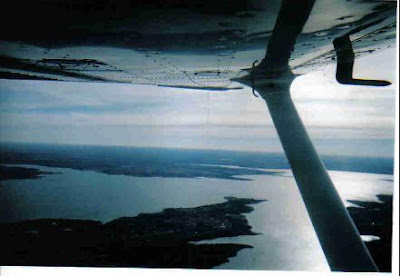 And now it's back to McKinney.  Setting up for Runway 35: 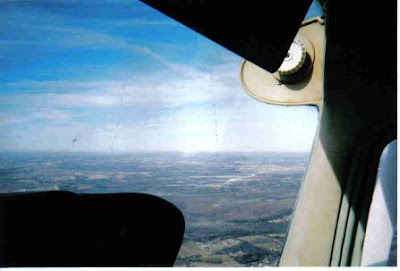 Here's how it looks when approaching from the other side (Runway 17.) 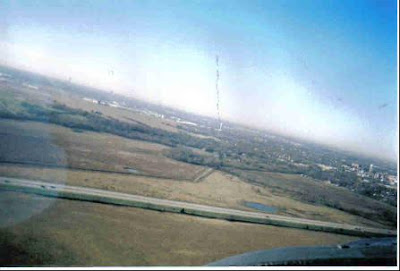 (That little smudge in the sky, over the highway, is another plane turning final.) 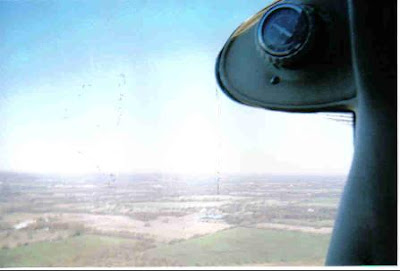 (Sorry for the poor photo quality--- this was literally a 'hold the camera and shoot whatever" pic!)

Landing complete, taxiing back to parking. It's funny... but after I fly, it feels like there are no questions I can't find the answers to...
Posted by flightwriter at 1:30 PM No comments:

Yesterday I learned a valuable lesson, and like most of those in my life it's something that I should have learned before now.  Actually, what's worst is that I did know better, but I chose to ignore the little voice that was telling me so.  It's more luck than skill that it turned out as well as it did.


Last week, after many lessons and even more postponements, I finally earned my solo rating at McKinney.  For the first time, my training has progressed past the point I was at before I left New Mexico, as this rating also includes the ability to check out the aircraft by myself for pattern work.  The Friday after Thanksgiving was to be my first opportunity to do so, but the weather conspired to delay that flight, and one for the next day as well.  I wasn't expecting the weather to be any better for Sunday.

At 7 o'clock on Sunday morning, though, the winds were reported calm at McKinney, and the sky was clear.  So, we headed up there (my parents are in town for the holiday) with the hope that the weather would hold.  An hour later, the winds were now coming from the southeast at 8 knots--- a bit brisk, but I had flown in winds identical to these on my solo flight the week before.  Most importantly, they seemed to be steady, without any gusts or radical changes in direction.  The cloud deck looked imposing, but it was well above the necessary 3,000 feet and didn't appear to hold any bad weather, and none was forecast besides.  With the packet in hand, I strode out onto the flight line, and preflighted 87-Echo. 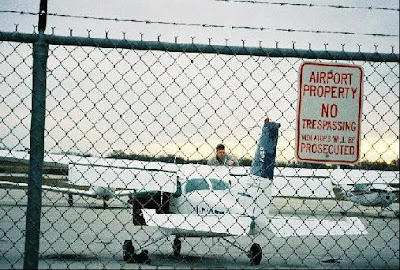 I was ready to go at 8:40.  Another Skyhawk was in the pattern already, and it was handling the winds well enough.  The windsock seemed to be permanently pointed out from the southwest, and if anything the wind seemed to have died down a bit.  I started the engine, called ground control, and taxiied to 17. 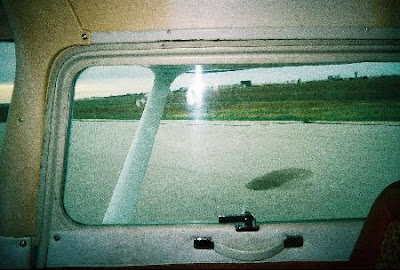 After performing the run-up, I was cleared to position and hold on the runway.  The other Skyhawk had just touched down, and was speeding down the runway getting ready to lift off again.  I had a great view as the other Cessna rotated... and also as it immediately crabbed approximately 10 degrees into the wind.  It was clear that the wind was slightly stronger above the runway, than it was on the ground.

It was at this point that I should have listened to my instincts.  The wind, though flyable and technically still well within my limits, was making me nervous, and I could feel it.  There was no harm, no foul, in requesting a taxiback to the ramp, where I could shut things down and wait for another day.  But then again, I had waited this long to be able to fly...

"87-Echo, cleared for takeoff, left closed traffic."  I figured if nothing else, it would be good practice for me to fly in conditions like these, and I knew I could use the practice on crosswind landings.  I had computed the crosswind component, and it had come out to just under four knots.  Five was my restriction... and I had soloed in a six knot direct crosswind just one week ago.  Nothing I couldn't handle.

I had the aileron correction already in, and as the plane lifted off it settled quite beautifully into a slight crab.  I glanced back, and saw that I was holding the runway centerline beautifully.  I relaxed my grip ever-so-slightly from the yoke.  See?  You can do it.

Left turn to crosswind, another left onto downwind, and I was paralleling the runway.  The other Skyhawk was a safe distance ahead, just getting ready to turn base, and I throttled back as the altimeter reached 1,600 feet.  The plane overshot slightly, to 1,700, and I nosed down a bit to hold the altitude.   The wind didn't seem to be as much of a factor up here.  I allowed myself to start enjoying the flight.

"Cessna 87-Echo, cleared number two for the option, follow the Cessna on base."  The tower called as I flew past the end of the runway, opposite the numbers.  I had already throttled back, put the carb heat in (carb iciing was a very real possibility on a day like today) and kicked the flaps down to 10 degrees.  The little Skyhawk dutifully responded, and settled into a perfectly stabilized descent.  Looking to my left, I saw the other Cessna turn final, and as soon as our wings aligned I turned base leg, right over where I usually did.

It was during this time that I realized that I currently had a tailwind, a brisk one at that, and that I was approaching the base-to-final turn much too rapidly.  I was flying too tight relative to the plane that was now landing, and if I continued the approach I would likely land before the other Cessna had the chance to rotate off the runway on its touch-and-go.

"Roger, 87-Echo."  Drat!  It was a stupid, student mistake, and I knew it.  At least the controller had been nice enough about it; it probably wasn't the first time it had happened.  I settled the plane into a perfect full-circle turn, compensating for the effects of the wind, and held it 500 feet above a lightpole along Highway 380.  I had made a mistake, but at least I had done the proper thing to correct for it, and it gave me the opportunity to practice another manuever.

Still, I knew that I had had enough.  I had just made one mistake too many for my tastes.  "Tower," I called as I banked out of the 360, catching the extended centerline of the runway.  "This will be a full-stop for 87-Echo."  The call was unnecessary, as the tower had already granted me "the option" to do either a touch-and-go, a stop-and-go, or a full-stop landing.  Still, I wanted to make it official. 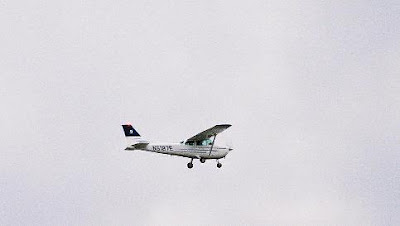 There was no fear at all present as I slipped the plane into the wind, banking the left wing into the crosswind as I held the centerline with right rudder, descending to the runway at 70 knots indicated.  I was still nervous, but I also knew that I could do this.

I flared right over the numbers, as I should have, still slightly fast but not too much so, and prepared for what was likely to be not one of my best landings.  The yoke was moving constantly, responding to the wind as I fought to hold the centerline in the flare.  Finally, the mains touched down---
---And I'm not sure what exactly happened next.

The nose wheel immediately contacted the runway, much sooner than it was supposed to.  The plane kicked back into the air, came down again firmly on all three wheels, and then shot back up.  Porpoising!  I had been warned about this, but I'd never actually experienced it.  I knew what would happen if I allowed it to continue--- a likely prop-strike at best, a ground loop at absolute worst.

In the one-point-five seconds my mind raced to comprehend all that was happening, my right hand had shoved the throttle and carb heat all the way in.  On the third bounce I pulled back on the yoke as much as I dared, the nose came up and it took the plane with it, lifting off the ground in a surprisingly stabilized climb.  Once the airspeed hit 70 and the climb was established, I retracted the flaps.  I also clicked the radio and announced the go-around, although by that point it wasn't necessary.

On climbout, my mind raced as to what had happened.  Had I relaxed on the yoke too soon? (Possibly.)  Had the wind whipped around and caught the nose?  (Maybe.)  Had I been too fast in the flare?  (Yes.)  Regardless of the why, I still had to land the plane, and I had just been confronted with proof that that wasn't going to be as easy as I had thought.

I was slightly comforted by one fact: it's very hard to break a Skyhawk.  The landing gear seemed to still be intact, and the plane was performing quite normally.  I flew a standard pattern, followed the routine perfectly, and settled into the approach for landing once again.  The wind seemed to have settled down since last time--- I remembered the sock whipping around just as I had touched down before--- and it remained almost completely straight down the runway as I flared once again, and set the plane back down on the ground.  This time, I also held the nosegear off the ground, until the plane slowed to the point that it settled on its own. 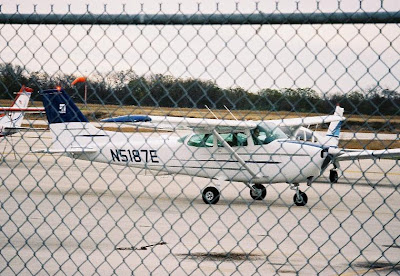 After shutting the engine off, I got out and surveyed the aircraft.  It didn't appear any worse for wear.  I checked carefully underneath the engine at the cowling, where the telltale sheetmetal crinkling of a bent firewall would be clearly evident.  There wasn't any, nor was the plane sitting any differently on its gear than usual.  I had done no damage to the aircraft, or to myself--- at least physically.   My nerves, though, were shot.

As I turned the packet for the plane back in to the front desk, I explained what had happened to the man running the desk.  After listening to me tell the story, he smiled.  "That's why you practice," he said.

I should never have taken off.  I should have listened to my instincts in the first place, and called it a day before I taxiied onto the runway.  The winds were within the safe threshold as I took off, but I should have known that they were probably not going to stay that way.   As the maxim goes, it's better to be on the ground wishing you were in the air, than the other way around.  I had just lived it.
On the positive side, my training had kicked in just as it should have, and I was able to salvage the situation and turn it into something of a positive.  The go-around was the one best course of action I had chosen all day.  If anything, I should have aborted the landing the moment I saw the windsock whip around on final.

But, again,  this is why you practice.
Posted by flightwriter at 1:27 PM No comments: