Still not much going on. The biggest news was yesterday, which was both my Grammie's (Mom's side) 84th birthday, and the one-year anniversary of my paternal Grandpa's passing. So, it was a mixed day, emotions-wise.

I was supposed to fly yesterday, too, but the winds whipping around DFW put a stop to that. A call to the field AWOS at Grand Prairie Municipal at 9 am said winds were blowing from 30 degrees off the runway, at a blustery 18 knots. What's more, the forecast called for them to pick up a lot in the coming hours. So I called Aviator, and begged off.

"Yeah, I was up at 6:30 this morning," Jay, my instructor, told me. "The winds were right down the centerline at nine, but at 2,000 feet they sheared to 200 at 52 knots. Our groundspeed was 30 knots heading south." For those who aren't aeronautically-minded... that's a huge jump. I can imagine the feeling in the cockpit as the light-as-a-feather SportStar hit that wind shear.

I already have some experience with winds in the Sport, albeit not to that extreme. My last lesson, the afternoon after I caught an early morning flight back from Albuquerque (we'll call that "Mistake Number One") while I wasn't feeling 100 percent up to snuff ("Mistake Number Two") was in winds blowing more-or-less straight down the runway, at around 20 knots. That's kinda high for a Cessna... never mind a light sport plane ("Mistake Number Three").

If you've ever seen "American Beauty"... you know that blowing-bag scene? "Sometimes there's so much beauty in the world, it overwhelms me" and all that claptrap? Well, that was us in the SportStar that day, without the accompanying angst-ridden narration. The takeoff went OK, until a powerful gust blew our right wing down at around 200 feet above the runway.

"SHEESH!" I exclaimed as I leveled the wings... before I realized my finger had grasped the push-to-talk switch while doing so. That meant my exclamation was broadcast to the tower, and whomever else was on frequency. Oddly, no one responded.

I've done strong winds before. You encounter a lot of updrafts flying over New Mexico in summer, as rising air comes off the high plains and hits the mountains. One of my first lessons was a dual-cross-country flight from Silver City, NM to Albuquerque, which required us to fly over the Pinos Altos mountains at 12,500 feet. We were doing OK, until we hit the leeward side.

That was in a 2,400-lbs Cessna 172 (ah, N12341... what a glorious piece of crap that plane was). While the 1,315-lbs SportStar has a smaller wing than the Skyhawk does, it has greater wing area relative to the fuselage... that means the plane's weight is spread out over a wider area, and each square foot of wing area supports less weight. It's called "wing loading." The lower the wing loading, the more responsive the plane is through the controls, especially in a banking turn. That also means the plane is more easily unsettled in rough air.

Jay and I spent just over 30 minutes in the air that day. We practiced steep turns and emergency procedures -- what to do if the engine fails, that sort of thing. I fought the plane through the entire flight... and more importantly, I was not enjoying it, which is a big deal for me when flying. Jay could sense it (maybe it was my repeated admonishments of "in the future, I wouldn't fly on a day like today") and we headed back early.

When we got back to the airport, the wind had become a crosswind. Feeling slightly nauseous (I've never gotten sick on a plane, big or small) I begged off and asked Jay to handle the landing. We could practice crosswind landings another day.

Next lesson is scheduled for Friday. Hopefully the winds settle down.
Posted by flightwriter at 5:05 PM No comments:

And yes, right now that's how I prefer it, thank you very much.

Later today I plan to meet my friend and former coworker Shoe down at The Old Crow, a bar (make that a "joint" -- "dive", while probably appropriate, sounds too harsh) many of the ABQ-ers used to frequent after we all relocated to Dallas. Shoe will forever be credited with finding it... but alas, over the past two years a lot of that gang has either moved on to other things, or moved back to Albuquerque. I'll soon be joining the latter group.

There are several things I'll miss about Dallas. At the top of that list are my friends... all of which, oddly, are friends I met back in New Mexico, who also moved with the job. All of those friendships have gotten stronger, though, in the years since. A guy who used to be 'just' a work acquaintance has become one of my coolest friends, along with his wife -- who I barely knew in ABQ. To say I'm going to miss our monthly dinners is a profound understatement; ditto our skating vid excursions.

Another friend -- hell, my brother -- I've known for close to 14 years. In our time in Dallas I've been Best Man at his wedding (reception -- they had a private ceremony) and I've seen him and his family move into their first new home. Moving away from them is going to hurt... especially come September, when football season starts.

And then there's Shoe... early 40s, a natural Ops guy and extremely well-read, who brings a zen-Parrothead calm to many stressful situations. In our time in Dallas, I've learned he's a fascinating character... so much so I've modeled a character in my book after him.

I expect these friendships to continue, of course... but of course it just won't be the same. By moving back 'home', I'll also be moving back to an area where I now know fewer people.

There's a strange, cyclical quality to that.
Posted by flightwriter at 5:04 PM No comments:

Don't Believe Everything Your Mind Tells You 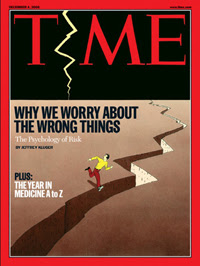 I was terrified today. More so than usual.

This morning was my unofficial, one-year-checkup with my oncologist. I say "unofficial" because of the damn scare back in August, that set the original one-year template askew... so my official one-year "anniversary" is now in March. But today's appointment with Dr. B was the 12th time I entered his office since January 2006.

As I walked in for my appointment this morning, I really thought -- I really KNEW -- that Something Was Wrong. I spent the entire weekend holed up in my apartment contemplating it. It feels different. Malformed. There's a hard spot that wasn't there before.

Oh my God, it's spread to The Other One.

Without getting too personal here... which is difficult, given this particular area of my anatomy... when a guy loses a testicle, the other one changes. It steps up to handle the increased workload. That means it gets bigger... and it goes through a series of spurts getting there.

There isn't a whole lot written on the subject; I didn't know it was going to happen, expect for Dr. B's assurances that I shouldn't freak out if I notice that Something Feels Different one day from the next.

Oh, and DON'T CHECK EVERYDAY. You'll drive yourself nuts doing that, he told me (OK, so he didn't go for the pun.)

I was expecting that early on. It didn't really happen, though, until about three months after the original surgery. As expected, it freaked me out -- and again later in the year. Both times, Dr. B sent me for ultrasounds to calm my mind. One I cancelled; the other I suffered through, while the whole "spot on your lung" scare was going on. Nothing amiss.

I freaked out today when the nurse found I'm running a slight temperature: 99.6. I calmed a bit when my blood pressure, surprisingly, read normally. I'd lost six pounds since my last visit; I'd wager most of that came this weekend, from worrying and not eating (quite an effective diet plan, really.)

The nurse led me to the examination room, to wait for Dr. B. I picked up a Time magazine and nervously thumbed through it. I didn't notice the cover story.

Dr. B walked in a short time later. He was smiling as he asked "how are you?" -- a response, I assumed, to the fact I'd managed to lose weight.

I nervously told him I thought something was wrong. "Which isn't new for me, I know," I said more bravely than I felt.

He thumbed through my chart. "I don't see your x-ray results here," he said, getting up. "Let me see if it's on my desk." As he walked out of the room, he pointed to the magazine cover:

Why We Worry About the Wrong Things

"You planted that, didn't you?" I replied.

The x-rays hadn't come back yet. He went through the normal exam -- feel for lymph node growths in my neck, armpits, and chest; listen to my breathing and heartbeat. All was normal.
Then came the dreaded Exam -- with the big "E". I've gotten used to the rather humiliating "grope and feel" that comes with each appointment. As I'd told him I had noticed some unusual things, Dr. B spent more time than usual on this particular portion of the exam.

Calm down, I told myself. It doesn't spread that way; if something was there, it would be a new cancer, not the old one... which hasn't come back in the year since the original diagnosis.

Yes, it's possible something new could show up... but it's also highly unlikely. Something probably would have shown up on the blood test before you felt it, anyway.

"Feel anything?" I asked nervously.

"Nothing unusual," he replied.

I admit, I asked Dr. B once again if he was "sure" before the appointment was over. He looked at me with a mixture of amusement and exasperation. "Do you see me sending you for an ultrasound?" he asked.

As I walked into the appointment this morning, I really thought -- I really KNEW -- that Something Was Wrong.

Oh, and the chest x-rays came back fine, too.

Sometimes, you can't believe everything your mind tells you...
Posted by flightwriter at 5:03 PM No comments: