What Kind Of Year Has It Been?

One week ago, I went under the knife to finally -- as in, after close to two months of anxious waiting -- determine what had caused a nodule to swell up on my left lung, and one of my lymph nodes to go through the roof inflammation-wise. As I wrote here many times after my initial "uh-oh" following a CT scan in August, the fear was that my cancer had come back. TC typically hits the lymphatic system... and while the lungs are less likely to metastasize, it's been known to happen (as it did for arguably the most famous testicular cancer survivor to date, Lance Armstrong.)

So, after weeks of tests and various stalling procedures by Blue Cross Blue Shield, I had my biopsy done Tuesday morning. I woke up in the recovery room four hours later, doped to the gills on morphine and barely aware of, well, anything, except the nurses coming in every two hours to take my blood ox level and heart rate.

But the preliminary news was encouraging.

"Your lung nodule was definitely an infection, and not cancer," my oncologist said with a cheer in his voice Wednesday. "And so far, everything shows your lymph node (which was located near the affected lung) was reacting to that. You're doing OK, my friend," Dr. B added -- the first time he's ever called me that.

More tests, more doctors before I was discharged Thursday at noon -- with all of them saying more or less the same thing. "It looks like an infection." "The frozen dissection of the lymph node was reactionary, not indicative of a tumor." "Maybe it's mold."

So... what is it? Well, we don't know for sure yet -- and there's still a chance some oblique test may show a trace of Something Bad -- but the infectious disease doctor who came by to see me Thursday morning seemed VERY interested in the fact I was from New Mexico, and had just been back in August -- right before the CT showed the swellings.

"You may have valley fever," he told me. Which isn't a walk in the park -- it's a fungal infection, common in dry, windy locations -- but it's not cancer, either. It's also not contagious, and only rarely life-threatening. So far, it seems my body was doing its job in combating the infection... and it's likely I never would have noticed anything other than a croupy cough, except that I get CT scans done every three months as part of the observation regime for TC. It probably would have gone away on its own.

So... good news. I'm still scared, of course -- a trait I've determined will follow me for the rest of my life -- but the news is a LOT better than we could have hoped for a week ago at this time. I haven't allowed myself the luxury of relief yet... that comes when ALL the tests are back... but I have noticed my blood pressure has dropped noticeably in the past seven days.

But, I mean, wow... what a difference a year makes. If you would have told me then...
Posted by flightwriter at 2:07 PM No comments: 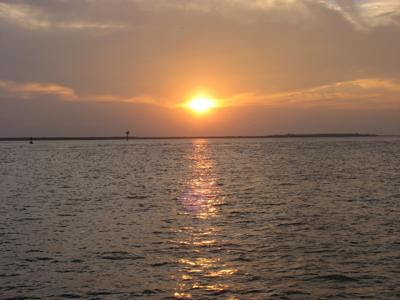 Well, we finally have movement on the medical front. The PET scan last week showed two areas of concern: the lung nodule (that lit up "lukewarm" -- may or may not be a big deal) and an inflamed lymph node (that showed "hot" -- meaning it is likely cancer, although there remains a chance it's not).

My biopsy -- the surgeon will remove both nodules -- is scheduled for Tuesday at 11:30 am. I'm driving to pick up Mom (and Abby) tomorrow, so she can stay with me through whatever may come. We don't have a return date yet.

All in all, I was having more fun last week. Although the shadow of "the scan showed two areas of possible metastasis" -- there's a truly ugly word -- loomed over me, I was still able to kind-of get away from it all and escape to Galveston for a weekend retreat. I admit it... for 36 hours, I ran away from my problems as much as I could.

I spent most of the trip in the car... driving to and from the coast, driving around Galveston, driving onto and off of the ferry between the Island and Port Bolivar. I've always been very respectful of water -- I still don't know how to truly "swim," although an ex of mine taught me enough to fake it, and not drown in a pool -- and there's just something about looking out over an open sea, and not seeing land anywhere. I also saw about 30 dolphins. It was humbling, vaguely spiritual... and just what I needed.

If only I could have stayed.

I'll probably need to go on chemotherapy. I don't yet know how bad that will be. Dr. B reassured me it won't be as bad as I've heard... yes, I'll lose my hair, but it will grow back as soon as I'm off it. I'll also feel weak, and nauseous -- although "very few people puke their guts out anymore," he tells me (that's an altogether weird and unexpected statement from my usually reserved, very proper Indian oncologist. It was also appreciated.) In the meantime, I'll miss two trade events I wanted to go to -- X Prize Cup in Las Cruces next week, and the AOPA convention in Palm Springs next month) but at least I should still be able to work through it all.

Here's to having a job I can do from home... on my back, if necessary, working on a laptop computer.

Yeah... last year at this time was a lot more fun. Saying my goodbyes from my former coworkers at AG, the Triumphant Hero going off to His New Career. I've played the "what would I have said then had someone told me here's where I'd be in a year" game... and I don't have an answer, other than benign resignation.

It wasn't too long ago I wrote that I considered cancer an almost-fair tradeoff for the good that's happened in my life this past year. Well, now I don't know anymore. At the same time, though... I'm looking forward to what next year might bring, when I'm past this.
Sometimes, that's almost enough.
Posted by flightwriter at 2:06 PM No comments: