I am very aware of the chain of events that have anniversaries coming up. Tuesday marks one year since I lost my Grandpa. One week after that, is the anniversary of the day I first noticed "something wrong down there," two days before Mom and I went up to Omaha for my grandfather's funeral mass. Six weeks after that day -- all Tuesdays -- I was diagnosed with TC. Winter was very cold last year.

And here I am... one year later. It's a beautiful day in Dallas, sunny and 70 degrees. It was cold and rainy last year. In the year since, I have become a strong believer in signs, and in harbingers. For the record, today... I feel great.

Soon I'll be heading over to my friends' brand new house, to watch football and gorge myself on turkey. I'm bringing a green bean casserole I made, using Grammie's recipe. She can't be here this year... and I couldn't be up in Omaha, or with my Mom & Dad in Albuquerque... but we're all together in spirit.

You see... this family has always been stronger than distance. I've really come to realize that in the past 12 months... especially in the past three.

It's the truth.
Posted by flightwriter at 2:09 PM No comments:

# 3 Clipper Cut, Trim The Sideburns, Block It In The Back


I'm still living in a surreal quasi-state between what is real, and what I feel like I'm watching in a movie. It's like the last two-and-a-half months happened to someone else. The apartment is starting to feel like "mine" again, meaning I'm adjusting to living alone after having Mom and Abby stay for the past three weeks. I took Mom back to Amarillo to meet Dad last Saturday.

And it all still feels rushed. No one was expecting Mom to be able to go home so soon -- no, strike that. She maintained all along this was a False Alarm, "it looks like cancer but I don't think it is," "we've crossed the main hurdle already." This, as my oncologist had planned to start me on chemo.

The good money was on me being on chemo right now. It's a bet Vegas would have taken.
But the odds have been defied. I'm not the kind of person who usually does that. The doctors say I've won the battle. It's Not Cancer. The gun wasn't loaded. The grenade didn't go off.

I can't describe how good -- and how unreal -- it felt to walk into Great Clips this afternoon.

"Number three clipper cut, trim the sideburns, block it in the back... same as last time." And the same as next.
Posted by flightwriter at 2:09 PM No comments: 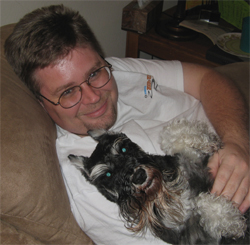 After the initial scare, after the weeks of waiting, after the moments of hope followed by the moments of fear... after meeting Mom and Dad in Amarillo to pick Mom (and Abby!) up so she could stay with me during the biopsy and recovery... and after receiving cautionary good news that, amazingly, didn't change... it's not cancer.

Instead, I picked up some kind of respiratory bug sometime this year... and it managed to do a pretty good impression of cancer on the CT scans and PET scan.

I had the biopsy done October 17. The docs collapsed my left lung and everything, to remove the growth. A frozen dissection of the swollen lymph node showed it was reacting to the lung growth, and wasn't itself cancerous.

The surgeon -- who told me before I went under he suspected it was nothing more than "fleas and ticks," as he put it -- confirmed that suspicion to my Mom in the waiting room, after my two hour surgery. "It's nothing. He'll be fine. Fleas and ticks."

We're still waiting on the definitive answer of what, exactly, I managed to catch. Turns out the hospital didn't draw all the necessary blood to run a second set of tests, to identify what breed of fungus I managed to breathe in (I won't get into the creepy, morphine-fueled dream I had in the hospital the night after they told me, where I had mushrooms growing on my arms.)

But the docs aren't very concerned... people breathe in these things all the time. Sometimes, they make us sick... most often, we never really think anything of it. This appears to be one of those "bugs" people talk about having, that they can't seem to shake, but live with for awhile without very much further thought. The difference is, most people don't get regularly-scheduled CT scans.

Dr B, my oncologist, was downright giddy at last Monday's follow-up appointment... which was originally scheduled to start me on the chemo he expected I'd have to go on. Instead, he did a cursory exam, before more or less tossing me out of his office with the blessing, "go live your life. Oh, and did you ever get that car?"

So it's back to normal. Mom and Abby went back to ABQ Saturday... even with everything going on, it was great having her here, and it was a very nice visit. And later this week, I'm flying to Palm Springs, to cover the Aircraft Owners and Pilots Association (AOPA) Expo show.

I gotta tell you... one month ago, I did not expect this to be the way things would turn out.

Wow. And Amen
Posted by flightwriter at 2:08 PM No comments: