(NOTE: This is where it all began, as it were. "Approach Lights" was one of three blog entries I submitted to Aero-News Network in May of 2005, to be considered for a volunteer "stringer" correspondent position at Oshkosh. After I returned home from the show and was in discussions with ANN to go full time, I was told this entry was the one that had convinced Zoom to give me a shot. And the rest, as they say, is history.) 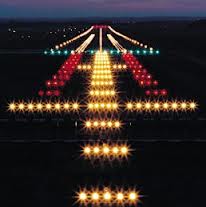 So here I am at 9:55 p.m. on a Monday night, parked in my traditional spot in the lot of a nondescript office complex at the southeast corner of Sojourn & Midway. On the other side of the fence before me lies the single 7,200-foot runway of the Addison Airport, a strip of grayish concrete neatly defined by crisp white edge lighting and the softer blue hues lining the taxiways. The interior of the Grand Am is illuminated by only the glow of its radio display, and the stroboscopic effect of the approach lighting system "rabbit" leading down to the threshold of runway 15. The effect is surreal.

This patch of asphalt has become my shrine, my sanctuary. I pay homage whenever I can, usually at least a couple of times per week. What makes it special to me is its accessibility and its location: less than two miles from my apartment, and directly in line with the runway under the approach path for aircraft landing on 15.

During daylight hours seldom a minute passes that doesn't find a Lear screaming overhead, or a Skyhawk puttering down the glideslope with full flaps extended and its engine near idle. A $70 million Gulfstream G550 may be immediately followed by a comparatively ancient V-tail Bonanza, with a Diamond DA40 Diamond Star, Cirrus SR22, or Cavanaugh's North American T-6 right behind them.

I imagine many of the tenants in those offices behind me must absolutely hate the location, given the smell, the noise, the drama. Either that or they've simply gotten used to it all, and pay the cacophony surrounding the airport little mind. If I were in their shoes, there would be another issue: I'd be too busy running for the window every time I heard the whine of engines, racing to catch a glimpse of what's flying overhead, how low the approach is being flown, is the airplane tracking the centerline or not. I'd never get any work done.

By 10 pm, though, there hasn't been a single plane overhead for the last half-hour. This is the quiet time, when all but the freight dogs and airline pilots have largely settled in to wait out daybreak on the ground. Just as the clock strikes 2200, the ALS rabbit blinks off with no ceremony, the approach threshold falls dark, and the runway lights dim to but a faint glow. The control tower is now closed at one of the nation's busiest single runway airports.

This is my time to reflect; for lack of a better term, I guess you could say that this is my time to pray. As Counting Crows sing "A Murder of One" from the CD deck (the title references birds, not homicide) I settle back into my seat in quiet reflection, my gaze never leaving the soft bluish glow from the scene before me.

Too many of my life experiences seem to relate to Counting Crows songs. Although he can't sing worth a damn, Adam Duritz does write some fantastic lyrics. He's very much a modern-day Harry Chapin. "All My Friends" is the perfect anthem for a single guy approaching his 30s, while "Recovering the Satellites" strikes a chord with me about Albuquerque that I can't quite put my finger on, but still identify with. And if a movie is ever made about my life, I want "Daylight Fading" playing in the background as the camera pans wide to capture my car heading down the 99, leaving Fresno behind ("I heard you let somebody get their fingers into you/ It's getting cold in California, I guess I'll be leaving soon...")

Right at this moment, however, it is "A Murder Of One" that defines my mood.

***
I've never read anything by Susan Sontag. It's likely I never will, as I don't usually seek out liberal intellectualism when I'm at the bookstore. Nothing against Sontag or any of the rest of them; it just isn't my cup of tea. But I did happen to read her obituary in TIME this past week. There was a quote of hers that the article referenced a few times, even using it as the bullet item underneath her photograph. I guess it's a well-known quotation, but I'd never heard it before:

That's all we should ever hope for, you know?

Too much of our lives seem to be spent drifting idly through our existence. Too many times we steer ourselves down the paths of least resistance and lesser stimulation, focusing only on those things that ensure we have enough novelty in our lives so that we may want to survive to see tomorrow, that give us just enough momentary satisfaction to continue on down the road to Who Cares What. Inspiration for better things often suffers as dreams are constantly deferred, more often than not thanks to the actions of the dreamers themselves.

Be serious. Be passionate. Wake up.

If there's one thing the last three years of my life have shown me, it is this: your life should be all about finding what excites you, what stimulates you, what breaks you out from the shell of mediocrity and forces you to grow... and grabbing onto that One Thing and holding onto it with all of your might. Be it flying, writing, pottery, poetry, teaching, religion, whatever. And, you should not be at all afraid to unashamedly proclaim it to all who listen.

Those people who stick around to listen, and still put up with you, are your friends.

At 15 minutes past the hour, I notice steady red-and-white lights racing through the sky east of the field, heading north at about 1,500 feet above the city. It's flying roughly parallel to the field, apparently setting up for a downwind approach to 15. The plane soon dips out of sight, hidden by the office buildings behind me, but soon my hopes are confirmed: the ALS strobes light up in brilliant pulses of light -- it hurts to look at them, or anywhere near them -- and behind the markers the runway and field definition lights are similarly vivid against the darkness. Amazing what a pilot can do just by clicking the mike switch seven times.

As I marvel at the instant Christmas tree-like effect, a piston twin races overhead, seemingly lower than planes usually fly the approach, just above rooftop level. It's low enough that the noise from the props makes the Grand Am's sunroof rattle in its frame. Against the illumination of the ALS lights, I can just make out the sleek shape of the retreating aircraft: the conventional tail, the knock-kneed landing gear, the shark fin-like fuel tanks at the tips of each wing. A Cessna twin of some kind, maybe a rakish 310 (below) or an early tip-tank-equipped 402. 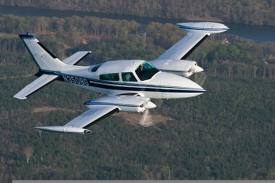 A freight dog, likely flying in with check stubs from outlying bank branches in tiny Texas towns. Heavy, yellow, reinforced nylon bags filled with transaction receipts, to be handed off to a waiting ground courier who absolutely must have those bags delivered to the Ops center within 30 minutes. My time pulling such duty at DMC makes it all-too easy to relate.

That pilot -- who by now is pulling onto the taxiway, ramp in sight, cleaning up the flaps and shutting down the landing light while also trying to keep the driver's van in sight to avoid ramp rash, or worse -- no doubt makes this run every night, or one very much like it. It is thankless, tedious, and occasionally terrifying work. He or she is flying freight in a clapped-out twin, its best days far, far behind it, so that they can make just a little money, barely enough to survive. I make more sitting at a computer terminal five days a week, answering calls about drywall.

But that's not what it's all about, fortunately; not by a long shot. Every hour that pilot is at the controls of that Cessna, is one hour closer to having enough time to be considered for hire by an airline. Maybe flying right seat on a regional Beech 1900 commuter plane, a CRJ, or -- with equal measures of luck and skill -- even a major carrier's 737 or A319.

FedEx, DHL and UPS are also desirable options, for while it would still be flying freight at all hours of the day and night, the pilot would get to do it on far newer, more advanced aircraft -- often the same types of jets the airlines fly -- and for much, much better pay.  Some pilots even prefer the cargo route to flying for passenger airlines, as there is no "self-loading freight" in back whining about that last bounced landing, or holding on for dear life after that high performance takeoff you just executed, a smug grin on your face.

That's the life, what that Cessna pilot's doing now, because it's flying for a living, pure and simple. No doubt the romance of the evening leg into Addison has long since worn off... but I wonder if occasionally, on his day off maybe, if that pilot doesn't drive to the parking lot of his hometown airport, and watch the planes taking off and landing for hours on end.  Maybe the novelty has long worn off, and he doesn't care to take his work home with him...

Or just maybe he does go and watch the planes... and as a Baron flies overhead in the pattern, perhaps he smiles and thinks to himself, "I get to do that..."

Fifteen minutes after they lit up the night, the runway lights fall dim once more. I take one last glance around the sky; there are several planes distant over downtown Dallas, even now at 10:35 p.m. on a Monday night, but none appear to be low enough to be coming into Addison. I start the car, and I'm startled by the radio suddenly coming to life; the accessory power turned off automatically a half-hour ago, but I hadn't noticed. Adam Duritz continues to warble as I turn out of the parking lot, and onto Midway.

I feel more alive now than I did an hour ago.

In five days, this coming Saturday morning, I have N5187E scheduled for two hours. I'll only be doing some pattern work; maybe I'll head out over Lake Lavon to do some slow flight or stalls. It's not nearly as glamorous as the life of a United pilot flying somewhere over the Pacific Ocean, en route to Tokyo. Hell, it's not even flying the Addison run in an ancient Cessna twin.

But it is flying, and it's another 1.2 hours or so in the logbook. That's not why I fly, though; not really. I doubt I'll ever even be a commercial pilot. I want to fly simply so that I can park and watch the planes taking off and landing at Addison, and smile knowingly at them, all the while thinking...

Be serious. Be passionate. Wake up.
Posted by flightwriter at 1:38 PM