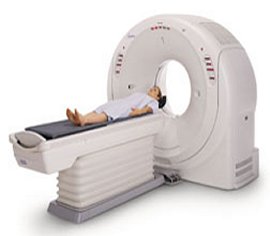 Except I'm not so sure. Christ, here we go again.

Tomorrow morning is my first CT scan in New Mexico, and the first one I've had in four months. It isn't the test that bothers me, of course... well, except for having to drink barium (and it seems no one in New Mexico stocks the flavored contrast -- banana was almost palatable -- which means I'll be chugging non-flavored metallic liquid tomorrow morning) and the whole, "getting zapped with mucho radiation" thing.

What if they find something? What if they misread the scan? Will the radiologist freak out about the scarring on my lung, from last year's biopsy? Will my doctor see that, and think it's something bad? Have those "non-pathological" lymph nodes gotten larger, to the point where the docs will want to go in for a closer look?

What if "75 percent chance of no further recurrence" isn't good enough?

Sigh. I've fallen a long way from the last post. What was I just saying about laughing at cancer?

Don't focus on the possible -- and slim, remember, slim -- chances of Something Bad showing up. Think of the good things. You turn 32 next week! Wait... that's not an entirely good thing, wasn't I 25 just a few years ago?

More good things... my friend, Lee -- He Of The Ever-Blessed Moving Truck -- is visiting this weekend, which means one thing: Football Sunday returns!!! In keeping with tradition dating back to... oh, 1998, easy... we plan to head to the SkyBox in the Northeast Heights to watch the games. In a related note, Go Dolphins! (They're Lee's team, and they're playing the Cowboys.

And, the best thing... Ana. My God, I think I'm falling hard for this woman. After a visit to Albuquerque over Labor Day weekend -- as you can see, we went on the Sandia Tram, her first time -- I drove down to Cruces last weekend to spend a day-and-a-half with her and her two boys, Alex and Christian. They seem to like me, and I get along great with them.

Today marks the one-month anniversary of Ana and me as a couple; we've known each other, if only in passing, for close to five years. We both say it seems longer, and that's a good thing.

Another good thing... one month in, and even with talking every day, we still haven't run out of stuff to talk about. I can't recall ever being able to say that in any of my past romantic relationships.


"I don't remember it feeling like this," I told my Mom -- who I pretty much tell everything -- after I got back Monday morning. "Things feel so... natural... with her. We're not rushing anything."
"That's how it's supposed to feel," she told me. "Not forced."


We're still taking things super-slow -- like I said in an earlier post, we've both been hurt before -- but at the same time, I feel this is developing at the right pace. We have all the time in the world, after all.

As long as tomorrow's scan turns out OK, of course...
Posted by flightwriter at 5:29 PM