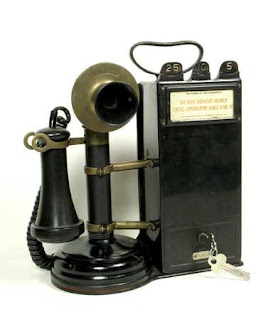 I've had the message -- I doubt she'd answer if she saw my number -- ready. Memorized. I've practiced variations, played with different turns of phrase. I've sounded out the dialogue, the cadence. The process looks to the untrained eye like I'm talking to myself, but they'd be wrong. I'm having a conversation with myself, playing each part. It's a trick I use when writing dialogue, and I don't think it makes me crazy.


"Hi, it's me," the message would say. "I'm calling to say I'm sorry... well, not really sorry for what I said, but how I said it. I didn't mean to sound so rude, so upset... but the fact is, I was upset, and I still am, and I think I had a good reason to be..." This is why I haven't dialed her number. An apology should never turn into an "I told you so," even if you believe you're on pretty solid ground.


We hadn't seen each other in almost a month. It wasn't long before that we spent every night on the phone, often for at least an hour. Thank God for unlimited long distance. We always had something to talk about... and it wasn't just "I really wish you were here with me, when can you come down/up here?" Although that was often a conversation topic, too.


I don't think I've ever felt so... comfortable... in a relationship. "This is the first "adult" relationship I think I've ever been in," I told a friend shortly after her and I started going out. An unusual statement to make, at 32... but, hell, I've always been a late bloomer. Better late than never.


She relaxed me, gave me confidence. I'd look at the sky aimlessly and think of her, feeling strongly that she at the time was doing the same, and thinking of me. Often, the phone would ring soon thereafter.


"I just went on break, and I just wanted to call and see how your day was going, honey," she'd tell me.


We openly cherished the time we spent together, the way couples in budding relationships do. She spent Labor Day weekend with me in Albuquerque; I visited her several times in Las Cruces, often working on the laptop on her dining room table (because I never do have a true day "off," god damn it, but that's a lamentation for another time.) I got along well with her two sons.


I sent her flowers at work, on each of our "anniversaries." I'd often find a card from her waiting for me in the mail, with a short message. "I am so happy we found each other again," she wrote.


For my birthday, she made up a basket... with a stuffed teddy bear front-and-center, bearing the message "Together 4Ever." She texted me often when I was in Atlanta. "I wish you were here!!!!"


We were connected, even when we were apart. Both of us spoke -- cautiously, but still -- of a future together. And then it changed. For the life of me, I don't know why... or what I suspect is the entire reason why. I know she was upset about her youngest son, and problems he was having in school. I offered to help; I'd helped him before with his homework, and he seemed to enjoy it. I did, too.


She resisted my offers to help... saying that would send the wrong message to her sons. She had a point there, but I still believed there wasn't anything wrong with the occasional visit -- especially since both her boys seemed to understand how I slotted in with their lives, and seemed more or less OK with that.


She felt differently. I'd planned to visit earlier last month, but she told me a few days before it wasn't a good weekend to come down -- "I wouldn't be able to spend the time with you I'd want to," she told me.


The weekend before last, I was down in Cruces on business. She knew I was coming. She left for El Paso with her sister instead, without even a phone call. "How the hell was I supposed to feel about that?" I asked her, rhetorically, afterwards.


She said it she had to go visit family who were in El Paso; I replied my phone number is pretty easy to remember, and she could have told me.


What I said after that -- out of hurt, frustration, and a small degree of paranoia, although mostly the feeling of being treated like the appendix in the body of her life --  will echo in my head for some time to come.


A mutual friend tells me she has no idea why I was "rude" to her, in saying that.


Five times I've picked up the phone since then, ready to say I was wrong, I was a jerk, and I'm sorry... conditionally. I don't think this makes me a jerk. I think I have the right to be treated better than I was... especially given how far our relationship had progressed.


I don't know how this will play out; no, wait, yes I do. It has likely played out already. I do know this will be the last blog post I write on the subject, unless something significant develops. I'm sick of sounding like a lovelorn teenager; 32-year-old Managing Editors need to practice some decorum.


But seriously... what happened? That's a question that may never be answered.
Posted by flightwriter at 5:32 PM