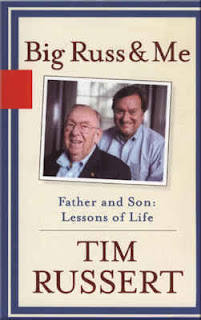 I read Russert's 2004 homage to his father -- as well as its 2006 follow-up, "Wisdom Of Our Fathers" -- when I was out in Dallas. Both are quiet, reflective works by a man known more for his strong-willed, and sometimes brash, persona on the television screen.

The first book showed Russert's unabashed love and respect for his father, "Big Russ." Russert stood to the side in his second book... instead sharing letters from "Big Russ" readers, telling Tim their stories about their fathers.

It is both poetic and cruel that Big Russ -- still kicking at 85, though in assisted living -- will mourn for his son this Sunday... Father's Day. Fathers shouldn't outlive their sons, it's as simple as that.

I first heard the news of Tim Russert's passing on my way home this afternoon. I've been watching CNN's respectful coverage all afternoon. To their credit, the network -- a competitor to NBC -- has given equal time to Russert's strong ties to his family (he had one son, who graduated from Boston College just days ago) and to his acumen as a political pundit and reporter. That is as it should be.

It's an odd feeling... to mourn the passing of someone you'd never met, but still felt you "knew" through watching them on TV and reading their books. I've been in mourning all afternoon... and I plan to hug my Dad extra hard this Sunday.
Posted by flightwriter at 5:59 PM