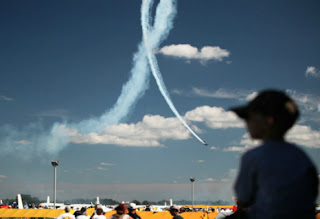 It was a fleeting moment. Almost lost to the wind, like so many thoughts that cross the consciousness... then disappear, never to be heard from again.

I'm sitting in the official ANN golf cart at AirVenture 2007, on the show line at the north end of 18/36 at Wittman Field. I am thoroughly tired, battered and aching, worn from the hours of traipsing from one end of the showgrounds to another. From the top of my head to the soles of my feet, there isn't a part of my body that isn't sunburned, blistered, or chafed. There is no doubt that I am working the show -- this isn't a vacation. These precious, stolen moments when I allow myself to be just a spectator are all-too rare.

But for now, at least, I'm just one soul amidst thousands watching in awe as Sean Tucker defies gravity by making his Oracle Challenger bipe "hover" on its tail, mere feet above the pavement. I've seen Tucker perform this same maneuver several times; I've even been able to talk with him about how he does it. I know exactly how this particular Houdini performs this particular trick. Doesn't matter, it's still unbelievably cool.

I pause long enough to wonder what it would be like to visit Oshkosh as "just" a visitor... and then I happen to look down, at my press badge hanging from the lanyard around my neck. With a coy smile to myself, I realize there's nowhere else I'd rather be. Nothing else I'd rather be. For possibly the first time in my life, a sense of perfect contentment settles over me.

I realize, of course, the flight line at Oshkosh will never be the White House Briefing Room. I'll never have the kind of journalistic drive that compels my mentor, Pete, to wish to be embedded in Afghanistan. I doubt a Pulitzer is ever in my future, and I'm not so naïve to deceive myself into thinking the audience of the "World's Largest Aviation News Organization" is very big at all.

And yet, with a sense of wonder, I realize I'm thoroughly happy to be making a living writing about airplanes, and matters affecting them. I'm good at it, too. People I've never met have complimented me for stories they know I wrote, regardless of whether my byline was attached or not. That says something.

I would never have guessed who was taking notice of those stories, and the impressions they made. Even after I left the "flight writing" game in April 2009, I guess I knew I wouldn't be far from it for very long. I did not know, and could not have guessed, how soon those people would be calling, to see if I'd be interested in doing a quick article for them. They're calling more and more lately.

And now... well, now I have a choice to make. My "day job" is working for a company that is very important to me, for it has played an incredibly important role in my life over the past decade. I have friends there; I work for friends there. Yet, I also realize that with each passing day, I'm flying further away from the direction everyone ostensibly is trying to steer towards. That is beneficial for no one.

At the end of the day... at the end of this day... I know with every ounce of my being that I am a writer. That is who I am, and how I identify myself. And I think that is my answer.
Posted by flightwriter at 11:35 PM