Those Magnificent Men In Their Ground-Taxiing Machines 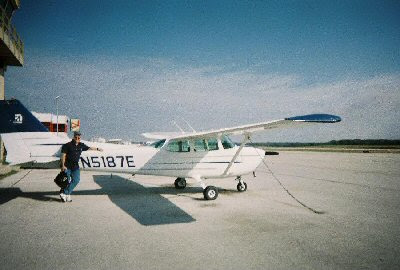 It was, quite simply, a perfect day.  Hardly a cloud was present in the brilliant blue sky (rare for North Texas, on both counts) and, most impressively, not a trace of wind.  It was definitely a day worth taking off from work, to spend some time cloud-dancing.  The propeller sung as it fast-idled at 1000 rpm, I had the seat perfectly adjusted (difficult to do in this particular aircraft)... I was in the zone!  Today was going to be a good day.

"And good morning to you, Skyhawk 5187-Echo.  McKinney Ground, taxi to 1-7, caution traffic exiting to the ramp at Bravo."  Even the controller seemed to be a good mood.

I blipped the throttle just enough to get the plane moving, then tapped the tops of the rudder pedals to test the brakes.  Eight-seven-echo dutifully responded by coming to a rapid halt, no sign of any problems there.  The traffic that Ground cautioned me about, another Cessna, was already clear of the taxiway and setting up to park on the north ramp.  I advanced the throttle to 1200, then back to just above idle, and began a brisk taxi to the end of the runway.

It had already been a good day.  Preflight had revealed to me a new lesson, one that I had never encountered in real life: water in the fuel.  Both wing sumps had been sparkling clear blue, but sumping the filter drain below the engine had shown two globules of water, settled at the bottom of the collection tube.  Water in the fuel could be a very bad thing; if the engine ingested even a small amount of it, about as much as had shown up in the tester, the engine could and very likely would stop running.  Not good.

Fortunately, the system had worked exactly as it was supposed to: the water, heavier than avgas, had settled to the very bottom of the Skyhawk's gravity-fed fuel system, where it could be quickly evacuated.  I had pulled the fuel drain at the top of the engine, accessed by a small aluminum access flap on top of the cowl, and let the fuel drain out onto the ground for five seconds.  (Please don't tell the EPA.)   I had then reattached the tester, and collected a clear sample.  No more water... just to be on the safe side, though, I collected three more samples at the fuel drain, and one more at each wing sump... All clear, no water.  A lesson previously learned, had now been practiced.

Back to the present.  I was now coming up to the run-up area, at the end of the runway.  Two other aircraft were present: a Beech Baron twin and what looked to be an early-60s vintage squaretail Cessna Skylane.  There was just enough room to squeeze 87-Echo in at the end of the apron.

Brakes set, I began the pre-takeoff checklist.  There's a checklist for everything in flying: walkaround inspection, landing checklist, what to do in case of an engine fire... dutifully, I flipped the handbook to the right page, and began running down the list.  Cabin secure, seatbelt and shoulder harness fastened, fuel selector on "Both," hold brakes.  Advance throttle to 1700...

The moment the engine spooled up to 1700 rpm, I saw it.  That access panel on top of the cowl, ahead of the windshield, was now fluttering in the propwash.  Had I latched it securely after checking the fuel and oil?  It wasn't coming open, but it was definitely loose, or not latched at all.

By now I was the only plane on the apron, as the Baron had just taken off and the Skylane was in position on the runway to do the same.  I was three-quarters through the checklist, and eager to fly.  I could fly with the panel loose; it had always been a little loose, anyway.  It was hinged, so it's not like it would come flying off suddenly...

...Or would it?  Sighing heavily, I throttled back to 1000 rpm, flipped the avionics master off, and pulled out the mixture.  The engine coughed slightly, and then the propeller stopped.  I set the parking brake, switched off the master switch and ignition, and unlatched the seatbelt as I was opening the door.  I'd better check, just to make sure...

The panel flipped right open as I lightly touched the edge of it, without pushing the release button.  I hadn't secured it, evidently.  I pushed the flap back down, and it seemed to be holding now.  So, it was a good thing that I had checked, then.  Better safe than sorry.  I hurried back into the cockpit, ran through the engine start checklist, flipped on the master and turned the key.  87-Echo turned over almost immediately.   Awright, I grinned.

I ran through the pre-takeoff check once more, before I taxied up to the hold-short line.  I flipped the radio over to the tower frequency.  "McKinney Tower, Skyhawk 5-1-8-7-Echo, ready to go at 1-7 for closed traffic."  I was thinking I would go around the pattern twice, before departing to the practice area over Lake Lavon.

I've never fully understood the odd connection that some people have with their cars, or other inanimate objects.  As fastidious as I am about my car, for example, I've never given it a name.  I recognize that the Grand Am is only a collection of off-the-parts-shelf General Motors mechanicals, in a somewhat dated and quite overstyled wrapper.  That's all it is.  It does not have a soul, it does not care if it starts or not, nor if it gets me to work in one piece, because it lacks the capacity to do so.

But airplanes are different.  They just are.  I realized that back in New Mexico, as I walked out onto the ramp at SevenBar one cold March morning to preflight N62507, the plane I later soloed in, before a lesson.  For whatever reason, as I approached the plane I blurted out "Good morning, my little Skyhawk..." before pausing in odd disbelief at what I had just said. 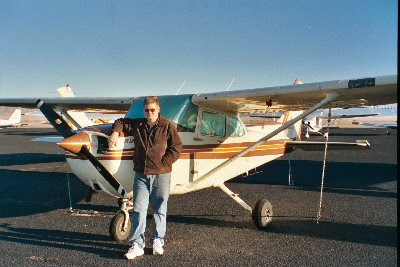 Five-oh-seven was also just a collection of mechanical pieces, designed with a higher purpose, perhaps, but in the end nothing more than another means of transportation, just like a car.  But, well... 507 also had an intangible quality, that was hard to define.  I was counting on it not only to make my hackneyed student-level attempts at flight look presentable, but more importantly to safely carry me into the sky and back down again.  It's survival depended on me, and mine on it.  For that reason, I decided that day that N62507 had a soul, perhaps even more than some people possess.  Naysayers be damned.

I'll always have a special place in my heart for N62507, because it was the first plane I flew all by myself.  It's funny, though, how in a fairly short time how N5187E has also endeared itself to me.  Like 507, it is not the prettiest airplane on the ramp, it's new white-and-blue paint scheme jarringly offset by it's 70s-vintage orange and brown interior.  All 172s look somewhat dowdy, this one even more so.

But I don't care.  This little plane--- my little Skyhawk--- has seen me through more rough landings and awkwardly-flown-patterns than 507 ever did, and any other plane likely will.  This is the plane that I'm truly learning to fly in, whereas 507 got me through the basics.  Somehow, 87-Echo feels like my airplane, although like 507 it's just another rental, available to anyone with at least a student solo endorsement and $82 per hour.  It--- she?--- has always seen me right, and has never failed to get me back on the ground safely and all-of-a-piece, even when I've been less-than-kind to it (my porpoising go-around comes to immediate mind.)  Eight-seven-echo is a trooper.

Which is why, on this beautiful Friday morning, I found it hard to be angry when, as I started my takeoff run at full-power--- that goddamned cowl flap door flew open, held upright in the propwash and right in my line of sight, looking for all the world (or at least to me) like my little Skyhawk was giving me the bird.

Decision time.  Forty-knots indicated, rotation speed is 60.  It'll stay on, I'm fairly sure... the hinge won't break... or will it?  And what damaged would it do if it did break off?  Would it fly into the propeller?  No, wrong way, it would hit the windscreen first... right?

"Understood, 87-Echo... what are your intentions?"

"Request taxi back to the ramp.  See if I can figure out how to keep this thing latched."

"Thanks for the help, 87-Echo." I replied, as I goosed the throttle enough to pull the airplane further down the runway to the Delta turnoff.  As soon as I pulled the power back to idle, the access flap settled back down into position... but when I pushed the power back in, it lifted right back up.
No flying today.

Once I had the plane safely parked and tied-down, I took a closer look at the door.  It looked as though the latch had been reinforced once before, and that the metal flap patched on earlier had finally worn away completely.  There was just enough of a edge sticking up at the front to catch the propwash and raise the door.

"Got any duct tape?" I asked one of the FBO reps, who had come out to take a look at it as well.  He shook his head.

I had spent an hour at the airport, and of that .2 hours were spent in the plane.  That's two-tenths of an hour that I get to put in my logbook, as I was at the controls of an airplane for that time.  Two-tenths of an hour, spent essentially driving the airplane back-and-forth.  It was all almost worth it, though, for what the Fixed Base Operator said as I turned the keys back in.

"You did the right thing," he said.  "It probably would have stayed on in normal flight, but had you needed to put the plane into a slip on approach, the turbulence would have snapped it off.  I've seen it happen before."

Often, learning to fly isn't about flying at all.  It's knowing when not to.  In that, 87-Echo had just taught me another lesson, and I had done right by her by not taking off.

At least, that's what I'm telling myself, as I sit here now checking the weather.  It's supposed to rain on-and-off through next week, and into next weekend.  Should the skies clear, it will have to be on the weekend, since I don't want to burn another vacation day from work.  I haven't flown in a month now, and I'm starting to feel just a little punchy about it.