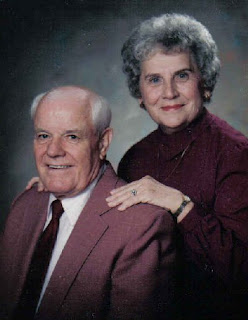 Harry Sayers would have been the first one to tell you that he wasn't a great man. He had greatness thrust upon him a couple of times, along with wealth and power. In his later years, he was very candid about why the lost those things, time and again. He drank it away the first time, although he was able to stop in the early 80s after being literally scared into it -- his doctor had told him, quite candidly, that the next time he came into his hospital because of something he'd done while drunk... the doctor wouldn't do a thing to save him. The world needs more of that, I think.

My grandpa was also the type of guy who, when his 11 year-old grandson asked him four years later why he had ever drunk so much that he threw away a lucrative car dealership, and had almost ruined his marriage over it ... he told me. I'll never forget that conversation... it was probably one of my first Defining Moments, right up there with my first girlfriend, Catherine, and learning to fly.

Money came and went for my Grandpa. When he had it, he spent it lavishly -- he'd owned over 30 Cadillacs, after all. He also bought my aunt a new car -- that I naively believed to be my own, when he told me to go downstairs and look in the garage, there was a surprise down there. I was sixteen, and I thought the teal Saturn was mine. I was crushed when he told me it was Peggy's... maybe it was the lingering effects that alcoholism had on his mental state, or perhaps it was just his personality... but I don't think he ever did understand why I was so upset.

I got over it, though (I got a sort-of revenge, several years later, when I bought my own Saturn... a nicer one than Peg's) and I'm proud to say I helped him pick out what would be his last Cadillac... a 1992 Sedan deVille, two-tone brown with a vinyl roof. "Which one of these do you think I picked out?" he asked me on the showroom floor of Classic Cadillac. I went right to it... and he then told the salesman that any flaws I found on the car, the dealership was going to fix. They did. 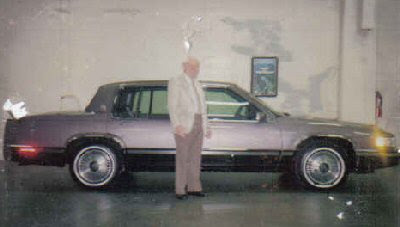 Familial relationships were strained several times. He sometimes did and said things that were unconscionable, so hurtful that you staggered back as though you'd been hit by a baseball bat. He eventually came around, though, and soon things would be back to normal. No one in my family ever forgets anything... but we do chose to forgive, for the simple joy and need and love of being together as a family.

Come to think of it, that would also become a defining trait in my life.

Grandpa's health began to fail long ago. He suffered frequent asthma attacks, and the ambulance made semi-regular trips to my grandparents' duplex on Grover Street. This was before dementia and Alzheimers... I don't remember when, exactly, he was diagnosed with it. Probably around 2000... it seems both like he'd always had it, and that he just got it yesterday.

He got worse when my grandparents lost their little poodle, Clancy, a few years ago. He had been my grandfather's best buddy.

Being in Albuquerque, and later Dallas, I didn't see very much of my grandpa. In fact... my God... the last time I saw him was Christmas of 1998, when my mom and I drove up to Omaha.

How did I let the last seven years go by without seeing him? How could you do that, Rob?

Until he was placed in a nursing home earlier this year, we did speak every week. I remember one of the last times I talked to him: standing outside the breakroom at American Gypsum, on my cellphone. He had just been admitted to the home. He didn't understand why.

"When I get out of here, I'm going to get the money together to pay for your flying lessons," he told me. "You'll have to fly up here, fly over the house and wave to me."

Okay, Grandpa, I told him.

This past Monday morning, I woke up with a start in my bed in Dallas at 4 am. I had heard a prop plane fly very low overhead. I got up and looked out the window, but couldn't see any lights. I grabbed my NavCom and tuned it to the ADS tower frequency. Nothing.

A minute later, again I heard the plane. It sounded even lower now. Once more I went to the window. Nothing, nor was there any chatter on Addison's CTAF.

I fell back asleep, only to wake up at 6 am. I had kept the NavCom on, and the controller announcing on frequency the tower was resuming operations is what woke me up. I got up, turned on the coffeemaker, and began the day for Aero-News. It felt good to get a headstart on the day.

Twenty minutes later, the phone rang. I knew why when I saw the phone number.

Grandpa, I'm happy you're finally in a better place. You weren't living your life for the last few years, just a shell of it.

I'm so very sorry I didn't call more, and wish I would have hugged you more often when I had the chance.

And I'm sorry I didn't see you waving Monday morning... but it was dark outside, and you were flying too fast for me to see.