Waiting For The Storms 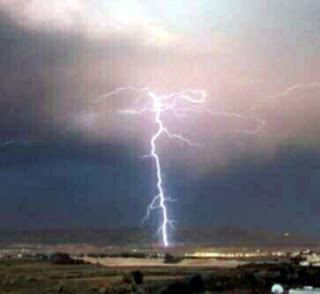 Well, most people, anyway -- as lately, I've been staying awake to watch as the storms roll in at night. For the past 10 days, North Texas has had a cold front stuck over it, which has been nice as far as temperatures during the day... but as warm fronts move in from the west and south, the skies over Dallas have opened, and put on some spectacular light shows as well. And, for some reason, I've felt the urge to stay up and watch as they move in.

It's not because I'm scared. In fact, I usually fall asleep soon after I hear the first crash of thunder, and I've always gotten almost perverse pleasure from being awakened by the sound of thunder and heavy rain. I also fall right back to sleep afterwards. (Same thing with hearing a loud jet coming over, like the Cherry Air Lear that blows in right at 5 am almost every night.)

No, instead I think the instinct that draws me to the storms, is a phenomenon similar to what Albuquerque Journal columnist Jim Belshaw once wrote about in his book "Semi-Native," back in the days when he still went by Jim Arnholz. He called it "ditch-watching," and that's exactly what it is: going outside to watch as rainwater -- overflow from city streets, or water running down from storms over the mountains -- fills the concrete channels that run through Albuquerque and most southwestern cities. People are drawn to the relative novelty of water in the desert.

When I lived in the North Valley, I was fortunate enough to have a little house right by an irrigation channel ("acequia") that, from late March through October, was filled with water from the Rio Grande. Properties along these channels could tap into the water, and use it to flood their fields (the traditional -- and inefficient -- way of irrigating). My landlords, the Pachecos, did this very thing... and their grass was always verdant green, so who am I to argue.

Anyway, I remember the feeling I got the first time I saw water in the channels each year. It was An Event, something worthy of walking up to the gate crossing over the ditch so I could sit and, well, look at the muddy water flowing slowly by. Waterbugs skimmed along the surface; dogs tentatively stepped down the banks to fetch a drink, although they had clean water in their bowls less than 100 feet away. 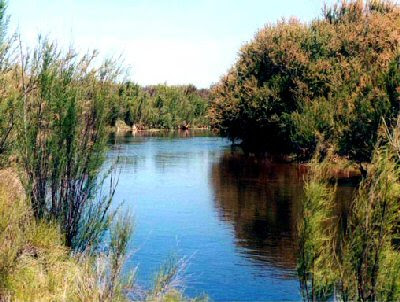 In the fall -- just before the air began to cool -- the ditches would run dry. It took less than a day after the Rio Grande authority closed off the gates for the ditches to empty, leaving behind the trash the water gathered in, as well as a lot of mud and large puddles. Those puddles were filled with tons of crawdads... some the size of your fist... that, as the puddles grew smaller, would battle to stay in what little water remained. Inevitably, everything dried out... leaving the crawdads to wither and die, or be eaten by dogs or coyotes. Or captured by kids.

It was creepy, almost otherworldly to me... and I found it fascinating. Still do. I love rushing water... it represents power, strength, and a force that can either spur creation or destroy vast areas. Same thing with the storms... they represent the always-dominant power of nature, that sometimes feels the need to remind humanity that "you ain't all that."

Maybe that's the feeling I can relate to. I dunno, maybe I'm in a place right now where I enjoy being humbled in the presence of larger forces. That's the theory I postulated to Monk Sunday, as we were driving back from filming in Fort Worth.

"You can get so comfortable in your life," I told him, trying to put into words aloud what my mind had been wrapped around for the past several days. "You get content, complacent... like this cold front parked over the state. But then outside forces come in and rile things up... boom, bang, thunder, rain. Suddenly, there's drama... and I guess I just enjoy that."

Monk looked at me kind of funny at that. "Okay, maybe not so melodramatic," I said. "But changes happen... and maybe I feel that forces are working to push me in a certain direction, and while that's happening I'm feeling... unsettled. Like the storms."

I don't pretend to understand that.
Posted by flightwriter at 1:52 PM