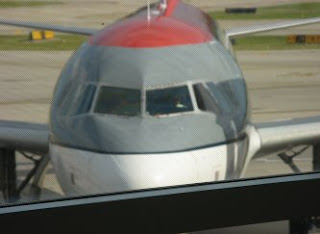 Phew. Nothin' like being on four airline flights in less than 48 hours to get your hackles -- and, evidently, your blood pressure -- up.

This weekend was an enlightening one. The ANN senior staff -- read, pretty much ALL ANN staff -- got together in Charlotte, NC for a powwow before Oshkosh. We have A LOT of neat stuff planned for the air show (which will also mark one year since I cast my lot with this crazy band of yokels... and I say that with affection) including expanded Aero-cast (podcast) segments. We've also tripled the number of staffers for this year... which means I will be doing less "on the field" duties, and more "in the office" editing and posting. I understand why the decision was made... but it will also suck that I'll mostly be in the office.

The good news is, my individual workload will be more clearly defined... and we've also built in time off for everyone to just go out and enjoy the show. THAT is a good thing... it will give me a chance to enjoy the Biggest Airshow On Earth, without necessarily Having To Write About It. (Although I probably still will.)

While the meetings went well -- and, from what I could see, Charlotte seems to be a nice town, with A LOT of trees -- the trip out there and back, well, sucked wind. I don't inherently dislike airline travel... but after writing about the travails of several major carriers these past several months, including bankrupt carriers like Delta and Northwest, I admit (here) some prejudice against operations that, in all honesty, have already proven to be incompetently managed and ill-suited to the needs of travelers. Which means I carry a chip on my shoulder in regards to both of those carriers... especially Northwest.


If only there had been enough room for said chip on the flights out to Charlotte Friday night... but there was little room for ANYTHING on the CRJ-200s Northwest sees fit to employ on those routes. These aircraft, to be blunt, are total shitcans: 50 passenger max, in a 2+2 seating configuration that gives passengers NO elbow room, and little legroom. 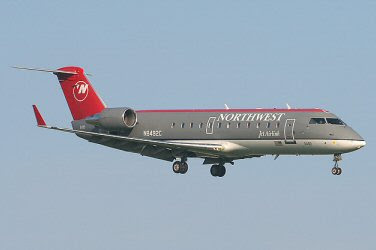 Oh, and to drive home the point that these 30-year-old Canadian planes are NOT designed with ergonomic considerations in mind, there's a large heating duct that runs along the lower cabin walls on both sides. Which means if you're stuck at a window seat, you have to bend your outer leg inward in order to rest that foot on the floor. Which means you can spend an entire flight sitting crosslegged, with little room to adjust.

I'd blame this on the fact the CRJs are regional jets... were it not for the fact that Brazil's Embraer sells RJs, too, that offer the same pax-carrying capabilities and equal (or better) efficiency for carriers -- while also offering something approaching comfort. Wisely, Embraer decided to forgo cabin width for length, which means a 1+2 seating configuration that offers just enough extra room to make the flights livable. Case in point, I flew an American Eagle E-145 last year, nonstop, to Milwaukee for Oshkosh. Three-and-a-half hours, on the right window seat (which meant I had someone sitting right next to me) with nary a cramp at the end of the flight. In comparison, by the time I landed in Memphis after 55 minutes Friday, my right leg wasn't speaking to me... and I STILL had one more miserable CRJ flight to go.

Things were slightly better for the flight out of Charlotte -- I was on one of Northwest's ancient DC-9s. Northwest operates the largest fleet of these Forest Lawn-aged airplanes around -- 148 of them, at last count, the newest of which was built while Reagan was still president and coherent. Age is not necessarily a bad thing with airframes, so long as they are maintained (the window I was seated next too had "6/2005" etched on it, so the plane had been in for heavy-line maintenance fairly recently)... but efficiency is, and these ancient "Mad Dogs" (named for McDonnell-Douglas, the company formed after McDonnell bought out Douglas Aircraft, original maker of the DC-9, in the early 80s) use equally ancient, loud, smoky, fuel-guzzling engines. Northwest can barely afford to fuel its own planes... but it can't afford to buy newer planes, either (the DC-10 trijets the carrier still flies transatlantic are even older than the DC-9s) 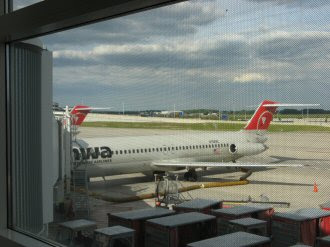 On the positive side, the DC-9 was A LOT more comfortable than the CRJs, and the flight to Detroit was something approaching enjoyable. Yes, I said Detroit -- a flight from Charlotte, NC to Dallas, TX was routed through Detroit-Wayne County Metro, in Michigan. It's Northwest's largest hub (Memphis is another, much smaller one) and, due to the realities of the hub-and-spoke routing system employed by most domestic airlines, meant I travelled nearly 1,300  miles for a trip that, point-to-point, is just over 800 miles.

Fortunately, I didn't have to actually SEE Detroit -- instead, we came in over Lake Erie, which was really cool and very pretty in the late afternoon light (woe is me that I left my camera in my bag, stuffed in an overhead bin five rows ahead of me). And, surprisingly, from what I saw of DTW, it's a very nice airport. Very clean, modern... very unlike it's host city.

Notice I haven't really said anything to justify my dislike for Northwest so far, however. OK, let me interject here what I saw on my four flights on this beleaguered carrier: baggage handlers throwing bags -- literally -- onto the ground while unloading another RJ in MEM; flight attendants, still haggling with NWA over their new, payroll-gouging contract with the bankrupt carrier, that acted like they worked for a bankrupt airline, and gave no smiles and little assistance to speak of on all four flights; and three out of four planes weren't just unkempt -- they were truly filthy, inside and out.

(A passenger seated behind me on the DFW-MEM run -- in the CRJ -- summed it up perfectly: "Welcome to Yokum Air." To which, snarkely, I added "We're bankrupt, and we show it. And if you'll look off to your left, you'll see a beautiful Continental 737 that you could have chosen to fly instead. Thank you for flying Northwest Airlines.. but may we ask why?")

The exception to most of those issues -- except for the grumbling FAs -- was the last leg of the flight, back home to DFW, in a fairly new and clean Airbus A319. Before that flight, I'd never been on an Airbus plane -- just Boeings, and various McDonnell-Douglas planes -- but I'd heard Airbus planes, as a rule, offers slightly wider cabins than their American counterparts (Airbus is a consortium between France's EADS and Britain's BAE Systems.)

They do. Whereas my shoulder rubs the wall when seated at the window of a 737 -- be it for Southwest, American, United, or AirTran -- I actually had about an inch of space between the seat and the wall on the A319. That made the plane feel positively cushy, although legroom was pretty tight. The trip home was by far the best flight of all of them. It was also the most scenic -- I got to see several other airliners sharing the skies with us (including an AirTran 737 that passed above us at 39,000 feet -- an RVSM-approved 1,000 feet higher than us. We even got bumped slightly by its wake turbulence.)

It wasn't all brickbats for Northwest, though -- they did manage to do a few things right, too. Three out of four flights were right on time, or early (the Airbus was delayed by 30 minutes for a maintenance issue) and Northwest has hit on a good thing by offering a snack box for $3. While I still feel you should at least get a bag of peanuts or pretzels when riding on a commercial flight, I will say that for $3, you do get a full meal... albeit one of snack food. Still, all the five food groups are covered -- raisins, meat, cheese, crackers, and... um.. Oreos. Yeah, those are the five.

Other news... Monday's appointment went OK, all is well.. except my blood pressure shot up since my last visit. Not sure why... weight is probably the reason, or added stress. Hmm... can I blame Northwest for that?
Posted by flightwriter at 1:57 PM