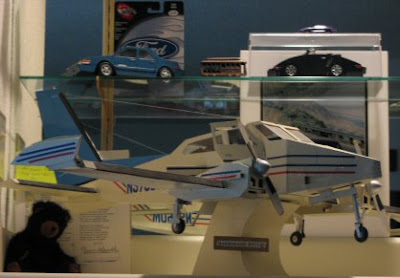 Hello from a cloudy and surprisingly rainy Dallas. After 38 straight days of sunshine, we actually got a pretty nice storm last night (notice, once again the rain came at night.)  Booming thunder... driving rain... and all at 3:30 in the morning. Absolutely perfect... still nothing like waking up to the sounds of a storm. I slept content the rest of the night.

Not much on the agenda for this weekend. Today's the day we try out the new weekend editor. He should do well... great writer. That also means I mostly have the weekend off, although I'll still be on Sunday. Due to the new guy's schedule -- he can't work Sundays -- we're going to try something new, that should benefit everyone: My sked will be Sunday-Thursday, same as Pete's, which means he and I can hash out the podcast script together (I crib a lot of site content from this script). This also means the 20+ stories I do per day will post sooner on the site... with about 15 for the next day, and room for 5 or so in Real-Time. My mornings will then be more open... with the majority of my workload in the afternoon. I can live with that.

More importantly... I will now have two REAL days off... albeit Friday and Saturday (which has its advantages... Friday evenings are now free of job obligations). So, a victory.

Spent the morning paying bills. As always, it feels good to write PAID on bills and stuff them in the Tax drawer... I guess that comes from the post-Fresno days when I stuffed bills into a drawer WITHOUT paying them. I also celebrated the complete payoff of one of the January medical bills by buying a Dell DJ Ditty MP3 player... I figure it will come in handy on the upcoming airline flights next month -- SEA for Arlington July 5-9, and OSH July 24-30. (At least these flights aren't on Northwest...) I'm listening to Billy Joel's "12 Gardens" concert album as I write this.

Next up on the agenda... didn't I say three paragraphs ago there WASN'T an agenda this weekend? -- is housecleaning. With the warm, dry (for Texas) weather has come the closest thing to a bug infestation I've ever seen here. I killed my first cockroach this week -- a Texas-sized one, ugh -- the first one I'd ever seen here in almost two years. As this apartment is by no means a dump, I chalk it up as a (hopefully) rare, weather-related event. Lots of what look like potato bugs have found their crawly ways inside, too. 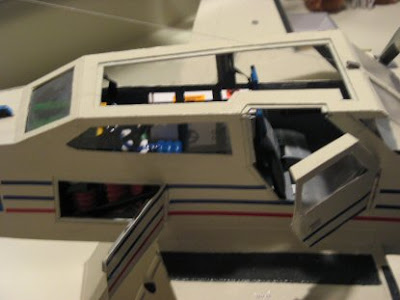 Tomorrow morning brings another filming mission with Monk, this one in Fort Worth. We haven't filmed in two weeks... and hopefully, we'll get it off without being rained out. Now that I think about it, we've shot a lot of footage under cloudy skies... which looks pretty good, as far as cinematography, but I'm hoping we can get some more "sunny" footage in, too, before the project is done. We're talking about heading to Austin to film, when Monk's wife goes down there for her massage therapy exam in September... that'll probably be the wrap to the project.

Let's see, what else... still fiddling with the digital camera, as you can see by the pics of the model plane I shot this morning. I'll probably head to Addison this afternoon (if I'm feeling adventurous, I may bike there) to try and catch the B-17G "Liberty Belle" that flew into Cavanaugh this week. It's been VERY cool, hearing and seeing a B-17 fly over the apartment... and while I'll see several of them next month at Oshkosh, it's especially cool having one so close, outside the airshow environment.

Not much else to write about... unless you want to hear about taking the GA to get its oil changed this week. So I'll wrap up for now.
Posted by flightwriter at 1:58 PM