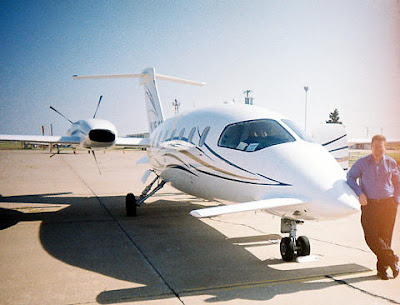 Wow... I had to be reminded by my good friend Monk that it's been two years (and now five days) since we arrived in the land of the Big D. As usual, Monk expressed his concern with the appropriate measure of discourse -- "DUDE, What Is Your Problem???"  With friends like these...

Thing is, I actually have been busy... recovering from Oshkosh (not the same experience as it was last year... but still very cool) and preparing to head out to Albuquerque to spend a couple of weeks with the folks... and at least a few days off from ANN. It will be my first vacation this year that won't involve surgery, and I intend to enjoy it.

I also just finished reading Jimmy Buffett's "A Pirate Looks At Fifty" -- I'm becoming quite the Parrothead lately, as I discover he's a surprisingly good writer of both books and songs -- where he starts by summing up his life in 400 words... and then proceeds to spend 300 pages expounding on those 400 words. Well, as I don't have the time to write a book (as it's taken me 10 years to write the one I'm working on now) I think I'll follow his example and sum up the last two years as best I can, as succinctly as I can.

Arrived in Dallas. Got lost on way into town. Banged on steering wheel of U-Haul in frustration. Monk will never let me live this down. Found apartment. Unloaded truck in half hour. Pissed off other movers. Lost wallet. Followed Quinn and Monk to their new house. Discovered wallet lost. Drove back across town. Found wallet on floor of apartment. Truck was unloaded by time I returned to M&Q's place. Started old job in new city. Cramped office. Same vibe. Goodbye, Focus -- hello Grand Am. Moved to new office. Crappy cubicles, no privacy. Still able to check out Internet often. Restarted flying lessons. Stopped speaking to a friend. Solo again. Wrap up shooting on skating vid with Monk. Friend Jen visits from ABQ. Parents come down for Thanksgiving, cook real meal for the first time. Parents watch as I biff a landing. It ends well. Christmas in ABQ. Discover upon return that Dallas is already feeling like "home." Non-speaking friend apologizes. Life goes on. Sprain right wrist playing hacky-sack at work. Go out for St. Patrick's Day anyway. Can barely drive manual-transmission-car home. Wrist heals. Friend stops speaking to me again. Head to ABQ for vacation, have interesting experience in Las Cruces. Arrive back in Dallas. Cop a ride on the company Piaggio Avanti (above). Way cool. Send in resume to Aero-News for stringer job. Wait patiently for response. Give up on hearing back. Plan summer trip to Albuquerque. I hear from Aero-News! Plans change, heading to OSH instead. Burn out from the customer service gig at AG. Switch to traffic. Have a blast in Wisconsin. ANN offers me a part-time job. Life changes forever. Apologize to non-speaking friend when I return. Other friends promoted. Start weekend editor job. Plan my escape from AG. Get a handle on traffic job. Friend stops speaking to me again. Second verse, same as first. Apologize again, resumes speaking to me two days later. It won't last. Finally get firm date on F/T job with ANN. Put in notice at old job six weeks early. Boss is not surprised, wishes me well. Turn 30. Start feeling old. Leave AG on great terms October 29. Friend makes herself absent when I say goodbyes. And so it goes. Old boss drives me to airport to start new job. All my life's a circle. AOPA, NBAA, back to Dallas. Find I missed it. Lose my grandpa. Discover something "weird" with my body December 6. Ignore it. Head to Omaha for funeral, then ABQ for Christmas. Have to return home hurriedly due to computer problems. Head back out in January. "Weird" thing gets diagnosed. TC. Mom rushes to Dallas, has to fill a gas tank by herself for first time in 25 years. Does so for her little boy. Have surgery. Single scariest experience of my life. Good news -- cancer seems limited to what was removed, on observation for next three years. "No lasting effects." Phew. Still scared. Start shooting second skating vid with Monk. Put on brave face at Sun 'n Fun in April, find still tired. Recovery takes longer than expected. Folks come down for Easter. Finally start feeling "normal" in May. Hire weekend editor, lose weekend editor, hire weekend editor, lose weekend editor. Pay off final residual debt from Fresno. Decide to stay in Dallas for another year. Apartment feels like "home," doctors are here. Others find Dallas to be "home", too. One even buys a new house. Never thought I'd see that. Miss friend. Life seems about right for most people in my life.

Here's to another year
Posted by flightwriter at 2:01 PM