Life's Been Good To Me (So Far) 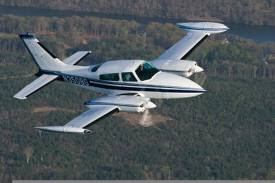 I should be working right now. I have literally 7,000 words to write in readying sponsor "thank you" messages to run starting Sunday night, thanking them for ponying up the bucks it takes to send 15 people -- myself included -- up to Oshkosh for the week. That, in addition to posting the site... and posting ahead, so nothing is missed while myself and others are on airplanes these next few days... and assorted other OSH-related projects I've been assigned. It's been a fun week... and I have to run to the airport in three hours.

Again, I should be doing it all as I sit here, writing this instead... but here's why I'm not.

I just got back from having lunch with a good friend of mine, Sebastian. I first met him in the summer of 2002, while I was working at DMC. As a lot of you know, that job is pretty much responsible for introducing me to flying... as that August, the company sent me up to Farmington, NM to cover a ground route. I rode in one of DMC's clapped-out Cessna 310s to get there and back -- N591DM. Sebastian was the pilot.

It was Sebastian who introduced me to flying... who first let me take the controls of an airplane (and who then proceeded to show me what a C310 could do -- "you don't have to be so ginger on the controls... see?" he asked, before kicking the plane into a 50 degree bank). I didn't realize how hooked I was, until later, after I'd been back on the ground for awhile... and realized that boy, do I want to be able to do all that myself.

That flight was the proverbial butterfly in China, that kicks up a hurricane in Tampa. A friend of Sebastian's, John, had just gotten his instructor's rating... and was looking for students. John was my first flight instructor, I was his first student, and his training has stuck with me to this day... and will be there for the days to come. He took me through my first solo flight... and would have led me to my checkride, had we both not moved from ABQ a short time after -- him and his wife to Florida, and me, of course, to Dallas.

My flights with John in N9566H, N12341, and... later.... N62507 reinforced my initial interest in flight. Yeah, I could learn to fly a plane... it really isn't that hard... and it didn't really faze me to do it. I was (and am still) easily spooked in the air -- turbulence is an entirely new experience in a small plane, versus an airliner -- but I know enough to realize it isn't a serious threat to my safety. And I've learned when to stay on the ground, when my gut tells me not to takeoff. Of course, that lesson was learned after I had already taken off... but John's training allowed me to salvage the experience, and do so safely.

More important than all of that, though, is that John also showed me how much fun flying... and all things airplanes, really... can be. John never failed to let me know how much fun HE was having on our flights, as well, even as he was doing less and less of the flying as my training progressed. His smile was as big as mine on the morning I first soloed... July 24, 2004. Two years ago, this coming Monday.

And wow... what a trip these past two years have been. My old job relocated me from Albuquerque... and actually set me up pretty well to start another phase in life in Dallas. Working at AG indirectly contributed to my continued pursuit of flight... as well as my job now, with ANN. It's been a weird, wonderful, scary trip... all of it.

"This has been a weird year," I told Sebastian over pancakes at IHOP this morning. "It started out bad, finding out I had cancer. And yet here I am now, seven months later... talking about planes with you (Sebastian is now a First Officer for America West, flying right seat on 737-300s as a reserve pilot. He and his wife also became parents for the first time last month -- so he's living something close to his ideal life, too) lamenting I have to catch a commercial ride in six hours to go to Oshkosh. I feel fine, things are going well... and I'm loving every minute of it."

I then smiled, as I took quick stock on my life today... and I realized, really, that I've got it pretty damn good. A dream job. Bills paid. A comfortable, contented existence, that is just interesting enough to keep me on my toes. Not a whole lot of drama.

"Funny thing," I told Sebastian. "These last few years, I wouldn't want to change a thing. Even cancer. If that's the price to be paid for all this... then OK. Even if I get sick again... which I shouldn't... but if I do, then... well, not OK, but I know I've still be pretty lucky."

And I really mean that. It's a feeling that's been building in me for awhile now, that I finally put into words this morning at breakfast. God, Grandpa Darmody, Tina, Mandy... whoever is up there listening to this... I think I get it now.