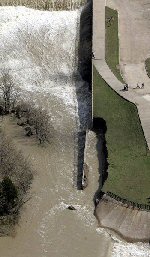 The Quest for Normalcy continues... not just within, but without and throughout all of Dallas.  After a pounding rainstorm this past weekend, the city is finally starting to dry out -- aided significantly by strong north winds that, while not quite as furious as those that plagued pilots landing at Addison Monday, are still fairly strong.

There's a chance of rain again tonight... but a small chance, not anything like the 7+ inches most of the city received between Saturday afternoon and Sunday night. Just goes to show... when it comes to Texas, even excess is done on a grand scale.

Meanwhile, I'm slowly starting to make some improvements around the apartment. Nothing major, but I did tackle a few projects that had been at the back of my mind since before the first of the year. I finally broke down and visited the garden department at Wal-Mart yesterday, and bought a new planter for the two spider plants my Mom gave me for Thanksgiving 2004. They'd been thriving in the small pot they arrived in, but clearly it was time for a larger home. After detangling their roots (that had become a rock-hard foundation underneath the old pot) I think I successfully moved them into a large hanging planter. As we approaching 24 hours since the move, it doesn't look like they're dying yet.

Afterwards, I moved the Swedish Ivy I got as a gift from my old boss at AG from the small plastic container it came in, to the larger pot that had once held the spider plants. That move went considerably easier, leaving none of the old dirt and plant entrails the spider plants gave up on my patio. My only concern is the new pot may be too big for the ivy... and I've already tossed the old container; oh well, we'll just have to wait and see.

Other improvements... I ordered a new stereo online, remote control everything, a few weeks back. I was tired of admiring the home stereo decks of others, while my five-year-old K-Mart-spec White-Westinghouse (a brand renowned for its high-quality audio equipment) soldiered on in the tinny background. The new deck arrived Monday. It's just a Memorex -- so, OK, a small step up -- but has much better sound quality. It also had a record player on top... so I could finally listen to the Jim Croce album my friend Jennifer bought me for Christmas. What struck me as a cool-but-quirky gift at the time has turned into my favorite album... in fact, I might start to search out some other old vinyl because of it.

I also want to get a small table to accompany the two chairs on the patio. I hardly spend any time out there... but really, it's a great planewatching spot when ADS is using 33. I can tune in the tower freq on my navcom, and about 30 seconds (Learjet) or two minutes (Skyhawk) after I hear the takeoff clearance given, the plane comes roaring (Lear) or puttering (Skyhawk) over the house.

I guess all of this is to make the apartment presentable when the folks visit next month for Easter. It will be nice to have both of them here... as well as erase the "last time you were here" stigma from Mom's visit in February, and my last visit to ABQ in January (a photo of me, Mom and Abby is below.) Plus, I get to see Abby again. 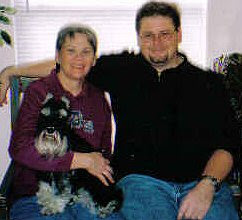 They're scheduled to drive down on the 12th of April, and stay through the 17th. That's but one day after I'm due to return from Lakeland, FL for Sun 'N Fun... so I'll pretty much only have time to unpack before they get here, no time to clean up. So that means I have to do all the cleaning done beforehand. No biggie -- the apartment is only 750 sq. ft. -- but still. I want the apartment cleaner than it's ever been before I leave for FL on the 2nd. That's probably a psychological thing, tied into the cancer scare.

Which reminds me... I don't think I've had a soda since the end of January. No particular reason... although the fact they aren't very healthy (and some diet sodas contain things the FDA isn't completely certain don't cause cancer) weighs on that. I almost slipped a few weeks ago; I ran by KFC on my way home and grabbed a value meal. Instinctively, I ordered a Pepsi with it -- habit -- but when I got to the window, the guy asked me again what I'd ordered to drink, so I changed it to tea. Almost like I was supposed to stay away from soda... let's see how long the streak continues.

Except for trying to keep a healthier diet altogether, as well as eating MUCH less and exercising MUCH more (getting weighed every month at the oncologist's gives me an incentive, and a way to track progress) I haven't altered much else about my day-to-day life in the wake of the cancer scare. To attempt to determine what caused it would be a path to madness -- no one knows what causes TC. It's likely a perfect storm of dissociated events -- a genetic predisposition, perhaps, combined with environmental and, who knows, physiological factors.

That reminds me... and this is how I'll end this post. As a rule, I despise "reality" televsion. Unless you are able watch it with a properly jaundiced eye -- which, if you can do that, what's the point of watching it in the first place -- it's always seemed to me to serve only as an escape for those who cannot completely function in the reality of everyday life. Okay, there's a difference between programs like "American Idol" and "Amazing Race" that award talent and creativity, versus those like "Joe Millionaire" and, the latest from the bastion of Quality Programming that is FOX, "Unan1mous" ... but it's all tripe, IMO. All filler, no nutrition.

The premise of "Unan1mous" is interesting: in order for one contestant to win a cash prize of up to $1.5 million, all contestants must reach a unanimous (so clever, ain't it) decision on who to award the prize to. Each time consensus is NOT reached, the amount of the prize is reduced by x number of dollars and one of the contestants is "voted off". Sounds like a neat game show, really... although it isn't hard to imagine most of the shows ending with everyone involved going home with washing machines, and no actual money...

...So, FOX being FOX, they've spiced things up a bit. SEX! DECEIT! INTRIGUE! And one contestant who attempts to garner sympathy by telling the other participants that he has testicular cancer. He doesn't, of course... but may I recommend to whatever higher power exists, that he probably should get it?

That's just sick. Bring on the lions in Coliseums, because maybe our society is doomed, after all. Meanwhile... back to housecleaning, and not drinking soda.
Posted by flightwriter at 1:49 PM