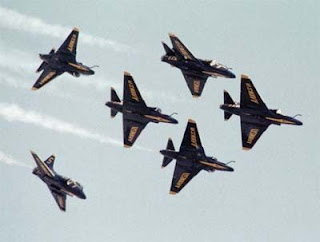 "You are never given a wish without being given the power to make it true.
You may have to work for it, however." -- Richard Bach, "The Messiah's Handbook"
The Wish began far earlier than I realized at the time: age 8, or thereabouts. The scene was an air show at Offutt AFB in Omaha. I was startled by an A-4 Skyhawk II of the Navy's Blue Angels, that suddenly screamed over the crowd at 500 mph. My eyes teared up... not from fear, though. In fact, I didn't know why. But I'm fairly certain I watched the rest of the team's performance, like a pupil enthralled by the words of his teacher. Despite that early signal, though -- and a family history with some interesting roots in aviation, especially on my Mom's side -- I never really, seriously thought about learning to fly. I did like planes... building Lego models (that were quite good, I might add) and the like, and I enjoyed being around airports.
A few years after that show at Offutt, my Dad and I were watching planes at Millard Airport, when a pilot walked over and offered to take us for a ride. I protested when my Dad said no, of course... but not necessarily out of a strong desire to fly in an airplane. I just wanted to do something "different," and see the pilot's airplane -- I think it was a Beech Bonanza -- up close. The Wish remained silent. 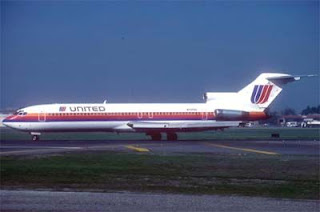 In fact, I was 17 before I finally flew in an airplane. My Mom and I took a United 737 from Albuquerque to Denver Stapleton, and then a 727 on to Omaha to visit my grandparents over the summer of 1993. I did like the feeling of power, of being pushed back in my seat as the engines throttled up, sending the airliner down the runway... and I handled the sensations of flight well enough, including an encounter with an "air pocket" (that I now know was actually mountain wave turbulence) as we turned final to land back in Albuquerque. But still, I didn't hear The Wish -- that sense of purpose, and that I'd finally found What I Was Meant To Do. I guess 17 would have been too early for that, anyway -- as was 24, when my friend Lee offered to take me up during one of his dual lessons, free-of-charge. Still I said no. 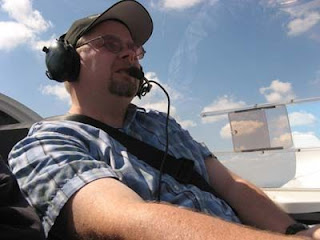 Most of you reading this blog know the story of when I finally "heard" The Wish: August 2002, when I caught a ride on a Cessna 310 freight hauler to cover a DMC route in Farmington. I had approached that flight with a mix of excitement and trepidation... but when the wheels lifted off runway 3, I knew. My rudderless existence up to that point at last had direction. I was supposed to fly. That later led me to Aero-News... which, in turn, led me to this moment.
Nearly six years after that flight in N591DM, I'm a licensed pilot. I add the qualifier because of something my boss, Jim, told me during dinner celebrating my newly-minted ticket. "You've always been a pilot. Now the FAA finally agrees." There are those within the aviation community who might quibble over the qualifications of being "only" a sport pilot. It is a fairly-new category, barely three years old. The standards are, admittedly, less-restrictive than those needed to obtain a full-on private or commercial pilot rating. I can only fly certain aircraft, for example... alas, none of which are currently available to rent in the Albuquerque area. I can't fly at night, or in instrument conditions. I can only carry one other person with me.
Nevertheless, I am a pilot. My instructor, checkride examiner, and the FAA all say so. The rest is only a matter of receiving the needed endorsements... and I do intend to pursue the required ratings to be able to do all those things, and more. In fact, I had to promise the examiner, Wayne, I'd do exactly that. "You'll be doing yourself and aviation a disservice if you don't go farther," he told me. "And I don't say that to just anyone." 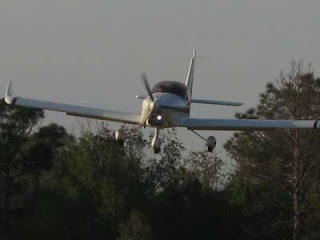 It has been an arduous road to this point. Finances derailed the journey twice, cancer once. There were times I gave up on becoming a pilot... saying it would be too hard, too expensive, too heartbreaking to come close to realizing The Wish, only to see it flit out of my hands yet again. That didn't happen this time. Almost one month later, I still can't believe it. And the full impact of the words "I'm a pilot" still hasn't hit me. My eyes did well up when I shut the engine down after the checkride, after successfully managing to avoid turning myself and Wayne "into a lawn dart" (his words) during my checkride. I choked up a bit when I called my parents later that evening, awkwardly asking them both to get on the line at the same time, so I could tell them at the same time "your son is a pilot." 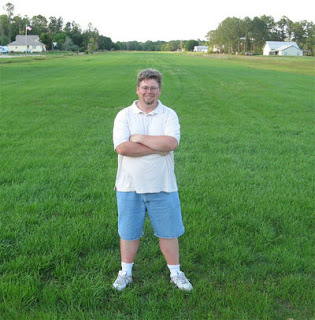 "When you have come to the edge of all the light you have
And step into the darkness of the unknown Believe that one of the two will happen to you Either you'll find something solid to stand on Or you'll be taught how to fly!"
Posted by flightwriter at 5:58 PM